The Co-founder of Ethereum, Vitalik Buterin and the man who foresaw the financial crisis of 2008, Nouriel Roubini, had an intense debate on the social media platform, Twitter recently. It all started when Roubini delivered some aggressive remarks on the nature of the cryptocurrency space. Previously, the NYU professor stated Bitcoin ecosystem as North Korea and Vitalik Buterin as a dictator.

To counter such remarks, the blockchain mastermind took to Twitter and put forth his opinion on the matter. He commented that the characterization is not a fair one. Furthermore, he admitted that while a technical elite does exist in all cryptocurrency ecosystems, his own involvement is much less pivotal than it seems from the outside.

In his previous Tweet, Roubini aka Dr. Doom also wrote that the Gini inequality coefficient of Bitcoin is worse than that of North Korea. Here, Buterin almost agreed with the economist and wrote:

“Cryptocurrency Gini is admittedly a problem, though taking the 0.88 statistic directly is misleading for several reasons…”

The first reason given by the techie was that the inequality that prevails in the cryptocurrency space is also a reflection of the general level of interest in the space, which according to him is still niche. He added:

“I’m sure the Gini of cello ownership is more than 0.88, but that doesn’t mean cellos are plutocratic.”

The second point stated by Buterin in these regards was about addresses. Here, he mentioned that addresses do not equate to users. While some users may have one address, others can have multiple addresses, out of which, big exchanges own many of them, hence representing many beneficial owners.

Buterin’s point was countered by a Twitter user who posted two different instances of Buterin’s Tweets. Roubini took this chance to call him out to state that he can ‘spin the data well’. 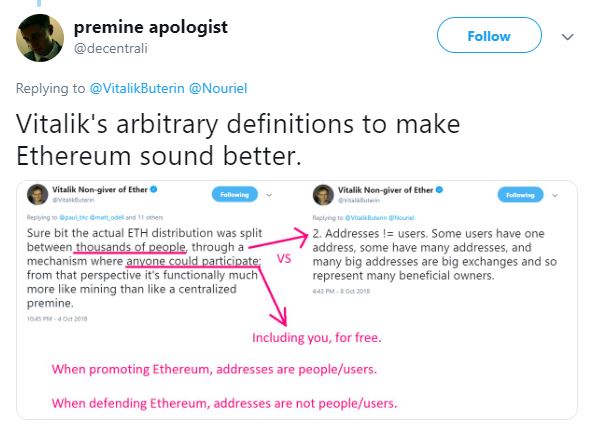 The Ethereum Co-founder did not cave and refuted the accusation by stating:

“That’s why I said “thousands of people”, not “9007” people. I was deliberately leaving room for error. And I would be very surprised if it was under ~3k unique people.”

Lastly, Buterin acknowledged that centralization of developers, exchanges and miners in the cryptocurrency space as a problem. He further said that the members of the space are working to actively implement multiple routes to mitigate the issue.