The cryptocurrency market saw an infusion of green today, as the market added over $20 billion to its valuation. While the hike seemingly came out of nowhere, Ethereum [ETH] and XRP stood over the rest as the biggest gainers from the hike. Bitcoin [BTC] came closely behind, amidst rumors of USDT crumbling with premiums on Bitfinex pushing the price over $7000. 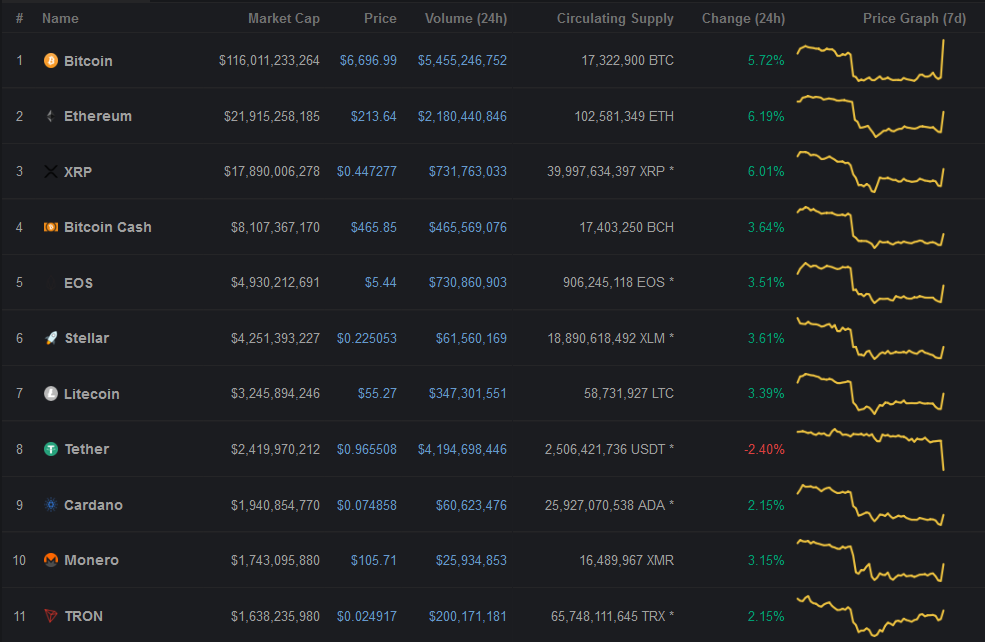 The second-largest cryptocurrency by market cap seemed to have pushed the price hike on others and remains as the biggest gainer from today’s hike. The price has gone up by 6.1% to trade around the $213 level. This represents a measly growth of 1.4% over the past month over fears of selloffs by ICOs which dropped the price below $200.

XRP has had a phenomenal month, standing head and shoulders above its competition with a whopping 64.7% growth over the past 30 days. It is also the second biggest gainer of the hike today, representing a hike of 6% to trade at the $0.447 resistance.

The first cryptocurrency strengthened its market dominance today, which has gone up to a high of 54.4%. The price of the coin is currently reflecting a growth of 5.7%, trading at $6696. Over the month, the price of Bitcoin is seeing a 4.5% growth as it experienced largely sideways movement over the time period.

Multiple coins have seen hikes between the 3-3.6% mark. The biggest gainers in this range are Bitcoin Cash [BCH] and Stellar Lumens [XLM] with a growth of 3.6% each, followed closely by EOS and Litecoin [LTC] with growths of 3.5% and 3.3% respectively.

The monthly growth for the coins are reflected within the 6% range for Bitcoin Cash [BCH] and EOS, with XLM, ADA, XMR, and TRX all showing double-digit growth over the past month.

Conspicuously standing out like a black sheep, the only coin that is down in the market rally is USD Tether [USDT], with a loss of 2% over the past 24 hours. This comes at a time where the market is losing faith in the USDT currency, as no transparent audit has proven that the coin is backed 1:1 by USD.