In a recent report published by Ernst & Young – one of the leading accounting firms in the world, it has been observed that most of the cryptocurrency projects funded in 2017 through ICOs [Initial Coin Offering] did not experience success in the markets since their listing in the markets. Anna Irrera, a Fintech researcher and writer, in one of her latest Tweets stated:

“Almost 1/3 of all cryptos financed through ICOs in 2017 have lost “substantially all value” and 86% trade below listing price – EY
71% still have no product. Of the ones that do, some have started accepting fiat, or abandoned their own token”

In the report, EY had analyzed and studied 87% of the total ICO funds, covering the top projects that conducted these ICOs. The research found out that most of the projects posed high risks in regards to fraud and theft. There was also major dubiety on the accuracy of the claims made by the projects in their Initial Coin Offering.

The financial auditing firm also conducted a similar study in December 2017. This analysis is a follow up to the previously published report last year. 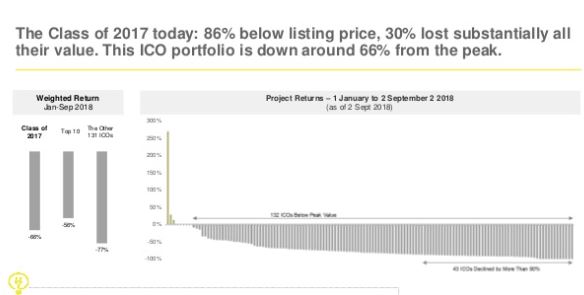 A flash warning was evident in the research wherein EY stated that investors with a portfolio dominated by 2017 ICOs are already in around 66% loss today. The report also mentioned:

“Of the ICO start-ups we looked at from The Class of 2017, only 29% (25) have working products or prototypes, up by just 13% from the end of last year. Of those 25, seven companies accept payment in both traditional fiat currency (dollars) as well as ICO tokens, a decision that reduces the value of the tokens to the holders.”

On a more profitable stance, it was observed that only 10 ICO tokens ruled most of the total profits made via the ICOs held in 2017. Most of these ICO projects are related to the development in the blockchain infrastructure field.

However, Ethereum still remains the king space for most of the projects to be built in the blockchain industry, as the new projects have failed to overpower the dominant success of the Ethereum blockchain.

The post Ethereum [ETH] remains the king space in the industry; 2017 ICO-scene was a fail, implies an EY report appeared first on AMBCrypto.