In the past three months, the usage metrics of Ethereum has revealed a rather surprising trend; a sharp increase in the number of empty blocks mined.

According to Alex Svanevik, the Chief data scientist at CoinFi, this points at ‘spy mining’ as the overall block utilization, the number of blocks processed a day and the average time between each block are all stable.

The technique being used by the illegitimate miner pools is called ‘spy mining’, which involves miners being rewarded for mining without actually processing any transactions on the block. In such instances, an ’empty block’ is formed.

Along with this, selfish mining is also gaining popularity within pools and involves miners trying to find the successor of a new block without broadcasting its existence to the network, giving them a head start.

After a detailed search, two miner pools were found to indulge in this practice; F2Pool, currently the world’s second-largest mining pool, and Etherdig. 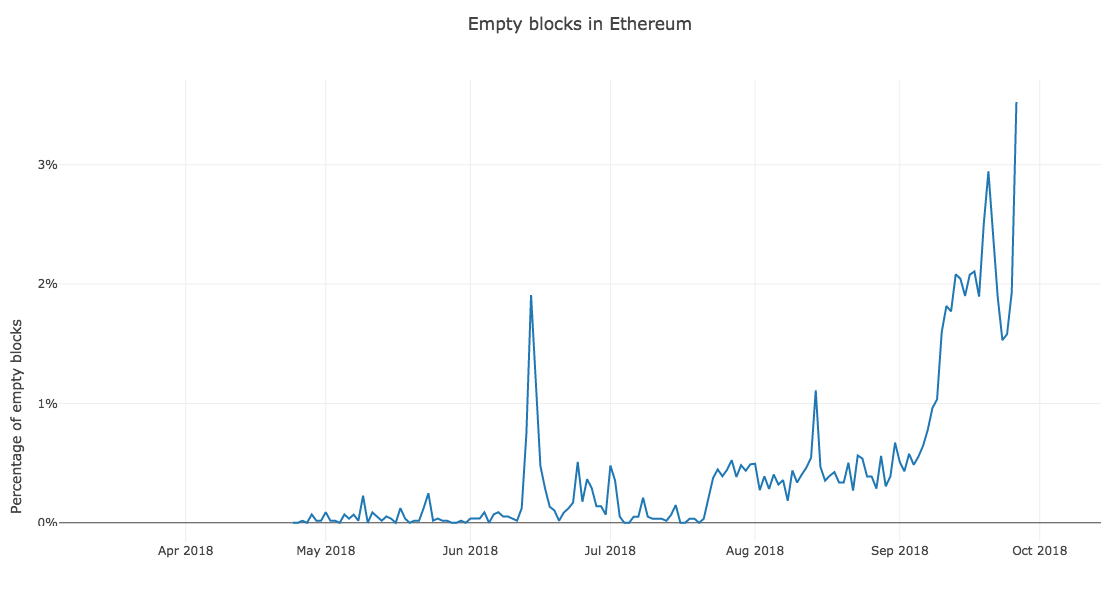 Since September, the number of empty blocks being mined has increased 637% | Source: Decryptmedia

A Twitterati and crypto enthusiast, Ansel Lindner made some crucial observations. He said that this was corellated to the miners “realizing that the value of ETH doesn’t come from transactions, but marketing”. Linder tweeted:

“The success of Ethereum’s marketing is only partly correlated with the number of transactions. There needs to be enough volume to support the narrative, but not too much to make it extremely hard to stay synced.”

He further observed that the recent decision made by Ethereum developers to reduce block reward to 2 ETH has miners chasing volume, before the upcoming Constantinople hard fork. This hard fork decision was made to address issues in the blockchain and cryptocurrency space, with a focus on further upgradesl.

In an attempt to maximize their profits, F2Poll and Etherdig started mining blocks without validating any transactions. This poses an unheard threat to Ethereum. The data shows a 15% faster rate of propagation for empty blocks, meaning that the spy miners were also getting a 15% increase in their total revenue.

If many miners resort to this, transaction times could increase and also cause a sharp increase in gas fees. Furthermore, if this continues, more sincere miners would call it quits and focus on other tokens, affecting Ethereum’s security.

Etherdig cashed in on the practice and mined over 1,250 empty blocks, starting mid-July this year, according to a research by CoinFi, and Alethio, an analytics platform. The mining pool has collected an estimated 3,750 ETH, worth over $862,500 as fees for mining these ’empty blocks’. This is alarming as Ethereum blockchain processes 5,800 blocks every day, over 540,000 total transactions.

This practice stems from the computational race that miners involve on a daily basis. In an ideal scenario, mining can only begin after a block is broadcasted.

The prerequisite to understanding this feature is to understand that each block in a blockchain contains different amounts of data. Whatever their limit is, it is not necessary for them to hold exactly that much data to be verified and added to a chain.

The verifications happen when a miner codes all of the block’s data, called hash, closes the block and broadcasts it. This code is essential for the next block. However, some pools start mining on blocks privately, before the broadcast. Though it is not possible to create a hash without first reading the block’s data, a new block can be created from an already existing hash before a transaction occurs.

To get a head-start, some miners find a new block and try to find its successor without broadcasting to the pool.

Etherdig did exactly this and deployed a system which spied on pools, which are privately mining. This provided them with enough information to create their own empty block. This practice is detrimental as a mining pool which controls maximum computing power in the network can monopolize mining of that network.

Each of the empty block mined by Etherdig contained no transaction data, but had the phrase “Interim Global Authority”.
In its early days, Bitcoin had also undergone a similar scenario.

However, this was quickly rectified as the token was in its early stages and one line of code was enough to prevent the malice from spreading. An upgrade was made on the network’s core code, making it difficult for miners to pry on other pools.

As Ethereum’s developer base is large [almost 250,000], it is a magnanimous task. It could either go the downward spiral due to its developer volume, or it could rectify the system by taking advantage of the large community.