Recent data published in Bloomberg by Juniper Research suggests that many metrics in cryptocurrency point to a coming implosion in the market. Daily transaction volumes for Bitcoin have fallen from an average of 360,000 a day in late 2017 to 230,000 in September 2018. Daily transaction volumes are also down from more than $3.7 billion to less than $670 million during the same period.

The study titled ‘The Future of Cryptocurrency: Bitcoin & Altcoin Trends & Challenges 2018-2023″ reveals downtrends among altcoins that point towards a coming collapse in the crypto market as a whole. 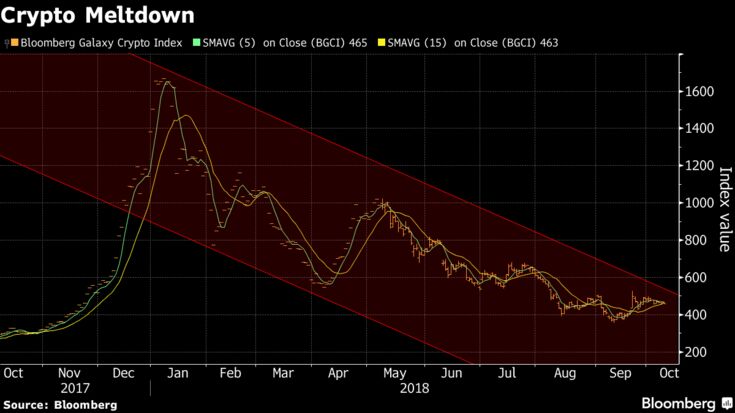 “Cryptocurrency transactions totaled just over $1.4 trillion, compared with less than $1.7 trillion for 2017 as a whole,” the study says. “However, by the second quarter, transaction values had plummeted by 75 percent, with total market capitalization falling to just under $355 billion…Based on activity during the first half of Q3, Juniper estimates a further 47 percent quarter-on-quarter drop in transaction values in that quarter.”

The researchers suggest that the cryptocurrency market missed an opportunity to rebound amidst strained trade relations between China and the US or during height of controversy surrounding Brexit. These incidents created prime conditions for “proving cryptocurrencies’ advantage as an alternative to the traditional financial system.”

“In short, given our concerns around both the innate valuation of Bitcoin, and of the operating practices of many exchanges, we feel that the industry is on the brink of an implosion,” Juniper said.

Indeed, declines in prices and trading volumes are only one of a litany of problems facing crypto. A new report from Diar reveals that Bitcoin miner revenues are already up to nearly $5 billion this year, and total miner earnings from 2017 were surpassed in just the first 6-months of 2018. However, Diar’s research suggests that electricity prices, along with greater involvement in the space from big corporations, are pushing small time mining operations out of the market.

The research from Diar suggests that not only is crypto facing problems on a market level, but that central control over crypto’s underlying operations are directing it away from its decentralized ideals.

Lastly, crypto has still yet to form a functioning relationship with any governing authority in the world. This problems typically breaks into two extremes: On one hand we see markets being completely closed off to cryptocurrency production and trading in places like China, thereby crippling growth and innovation. On the other hand, we see more and more crypto companies setting up shop in obscure locations across the globe which offer no regulatory framework to protect investors from poorly run ICOs and cases of fraud.

In Japan, a region typically considered a haven for cryptocurrency, recent inside reports are suggesting that citizens are growing increasingly afraid of investing into cryptocurrency due to a combination of the growing rate of cyber-crime combined with a distrust in fair and effective government regulation. It appears that any way you slice it, crypto and government can’t seem to get on the same page.

Cryptocurrency and blockchain technology have brought with them the promise of a technological revolution which could completely reshape the world of finance. However, the obstacles standing in the way of this goal being achieved seem, particularly in the eyes of the mainstream, impossible to overcome. Whether an industry implosion is imminent, and if it will mean the end for crypto should it occur, remains unclear. Supporters are left hoping that regardless of what happens in the short term, the innovative technology and the underlying values supporting a free economic world will be enough to keep crypto marching forward into a better future.

The post Bloomberg: Juniper Research Suggests the Crypto Industry is on the ‘Brink of an Implosion’ appeared first on UNHASHED.