Eric Wall, the blockchain and cryptocurrency lead for Cinober Financial Technology, recently tweeted an interesting insight into how Bitcoin is the ‘foundation’ for all tokens. He pointed out certain ‘factors’ which could potentially make it the ‘Supreme Court’ of altcoins in what he termed “The Satoshi Creed of Decentralization”.

Cinober Financial Technology is a Swedish firm which is currently speculated to be the future cryptocurrency trading desk after it was offered $190 million public offer by Nasdaq. Due to its prominence, Wall is popular amongst the Twitteratis’ for his insightful tweets about the cryptocurrency landscape.

His 21-tweet series explained how Bitcoin is the ‘role model’ for all the altcoins basically because of four major points. The first parameter he talks about is the foundation of Bitcoin. The cryptocurrency expert opines that features such as user interfaces and claims of rapid growth are of little consequence to the future of any altcoin.

The foundation on which a coin is formed is what is of importance. He credits this to a “fundamentally different perception with respect to architectural design”.

A ‘rock-solid foundation’ is what keeps a building or any structure for that matter, strong. He quotes the examples of “religious monuments, skyscrapers or pyramids” which passed the test of time due to its strong foundation.

The blockchain expert then applies the same principle to software systems. Software designs, including protocols [TCP/IP, the Internet] and financial infrastructure, play a crucial role in determining the strength of a system, he argues.

However, at the foundation level, complexity is the system’s worst enemy. He tweets: 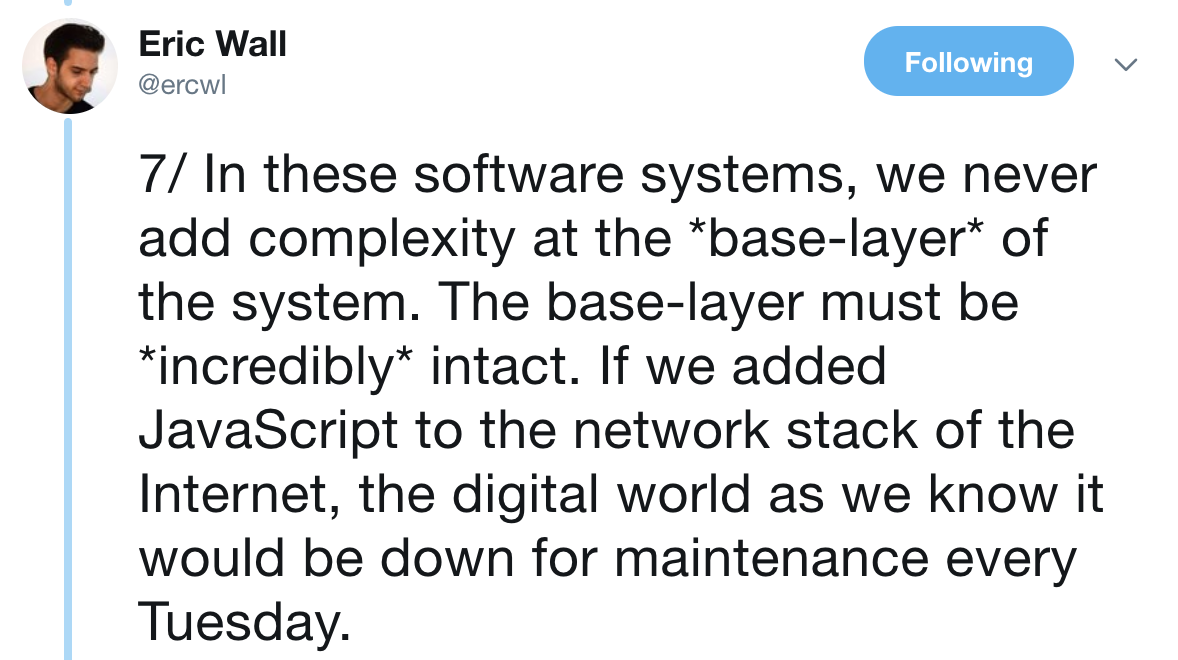 According to Wall, this principle has been well-implemented in the Bitcoin eco-space. He opines that Bitcoin has now become a “protocol and a financial infrastructure”, which could potentially provide a “better and sounder” form of money in the long haul.

The second factor he talks about is how laying a clear and strong foundation is much more difficult than adding “features”. The former software engineer further explains how adding features is easy as more often than not, it is copying something that is already existing. Irrespective of how many features are added, Bitcoin is way far ahead for competition to even catch up, he explains. He owes this to the fact that Bitcoin’s strong and detailed sub-hierarchy, including subchains and channels. He tweeted: 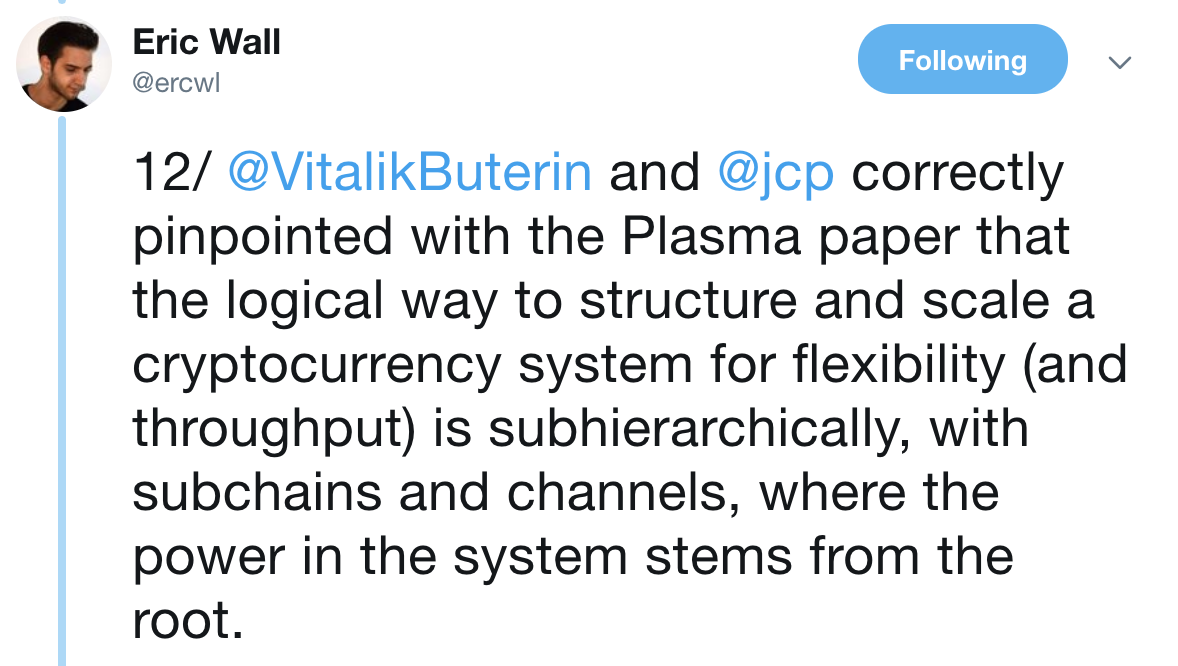 “What the analysis failed to capture was that Bitcoin, in turn, can act as the Supreme Court for Ethereum. And when that happens, there will no longer be any need for ether. Ether, same as all coins, are just integers — and are entirely replaceable from a system perspective.”

The third perspective he talks about is the how Bitcoin will never give up on decentralization. He tweeted: 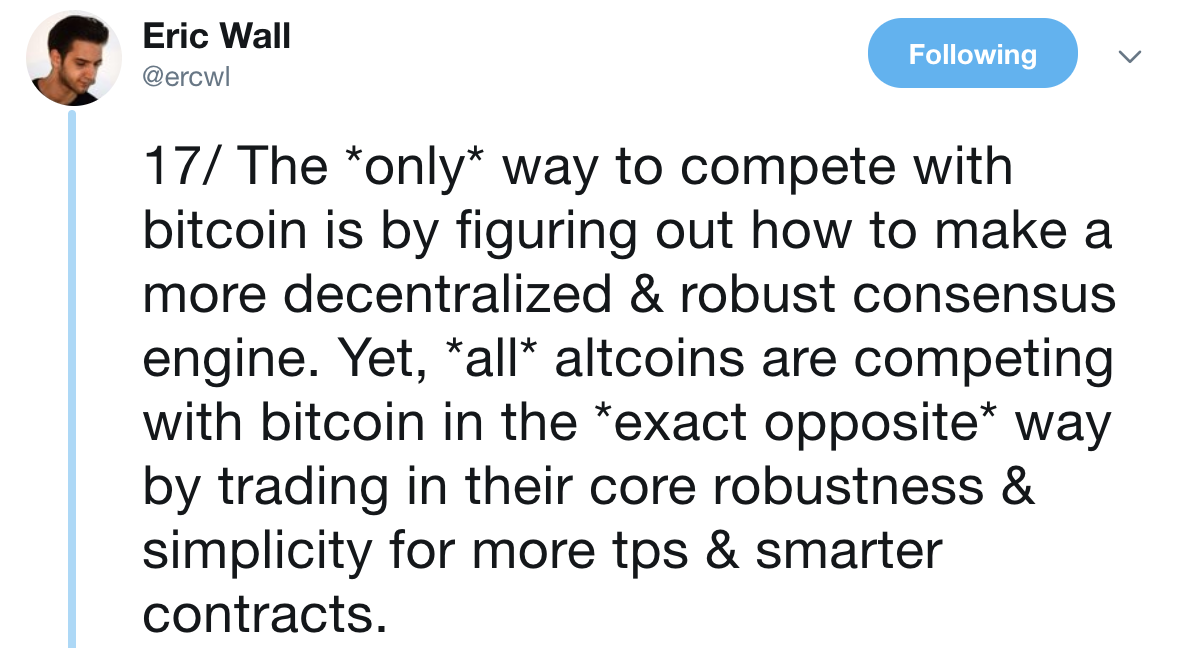 The cryptocurrency specialist also argues that the non-creativity of altcoins is what makes Bitcoin the root consensus engine because an increasing number of projects are now facilitating BTC to “travel through software applications”. 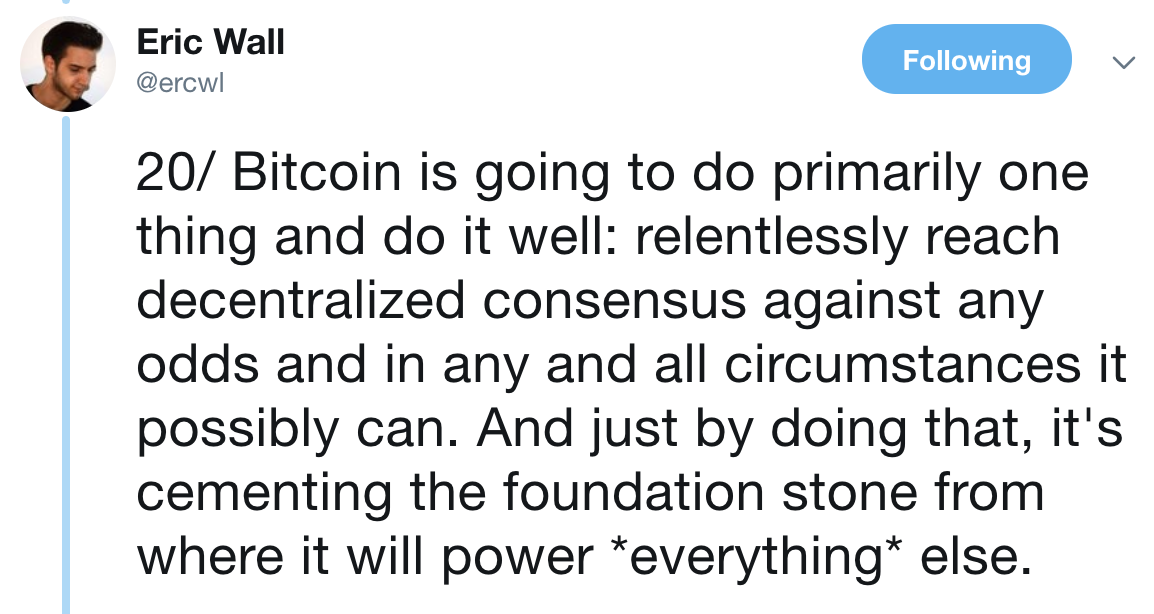