The cryptocurrency market opened today, 10th October, to most cryptocurrencies seeing red across the charts. Popular cryptocurrencies like Bitcoin [BTC], Ethereum [ETH] and EOS were all suffering under the weight of the bear, a polar shift from the previous day’s bullish behavior.

Bitcoin [BTC] has been maintaining a consistent hold above the $6000 mark, which is a point that market analysts have predicted to be the ‘Bitcoin bottom’. The Bitcoin price has also shown that the cryptocurrency’s price movement has been sporadic with the occasional crest enticing holders and enthusiasts.

At the time of writing, Bitcoin [BTC] was going down by a steady 1.21%, a figure that was reflective of its slow growth throughout the week. The cryptocurrency was trading for $6554.65 with a total market cap of $113.489 billion. The 24-hour market volume amounted to $3.819 billion which was miles ahead of its closest competitor, Ethereum [ETH], which held a market cap of $23.131 billion. 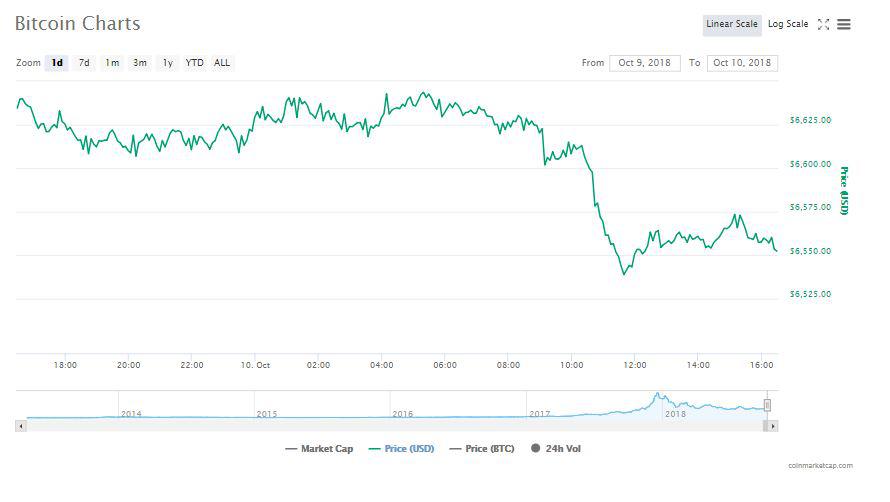 Most of Bitcoin’s trade volume was coming from BitMEX, which held $1.423 billion of the entire trade. BitMEX was closely followed by EXX, which had a grasp on $332.818 million of the total BTC trade.

Bitcoin was also in the news recently when a United Kingdom Member of Parliament [MP] recently announced on Twitter that he used the cryptocurrency for the first time. This represents a major move in the adoption of the cryptocurrency, as the MP utilized it to donate to a charity.

The limelight was shown on Bitcoin again when Nouriel Roubini aka Dr. Doom, the man who is best known to have predicted the financial market collapse of 2008 three years in advance recently shared an opinion on the cryptocurrency. Roubini stated: