Kevin O’Leary, Co-founder of O’Leary and Softkey, aka Shark Tank’s Mr. Wonderful invested $100,000 an app which could convert spare change into Bitcoin [BTC] and other cryptocurrencies, in exchange for 50% equity in Bundil.

The app automatically invests users change from their debit or credit purchases in cryptocurrencies. It sums up the day’s expenses and invests the space in cryptocurrency. The app supports top cryptocurrencies such as Bitcoin [BTC], Ethereum [ETH], Litecoin [LTC] and Bitcoin Cash [BCH].

The Founder of the app, Dimitri Love came to the show with the hope of raising over $100,000 for 10% equity. All the sharks except O’Leary backed out from investing in the app.

However, the offer made by Mr. Wonderful resulted in an unsettling environment as the proposed equity was 50%. The proposal left all the other sharks claiming that it was an unreasonable demand including Dimitri Love. Nonetheless, in the end, Love struck the deal with O’Leary, settling at 50% equity for $100,000.

Daymond John, Founder and CEO of FUBU, commented on the deal, stating that Love was not happy with the deal and looked “miserable”.

The shark spoke about the investment on Twitter. He posted: 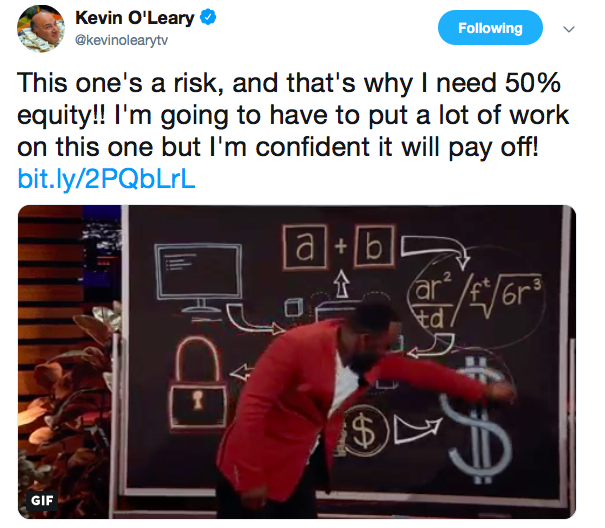 O’Leary also seemed to be quite optimistic about his investment, irrespective of his general perspective on apps. He further said on Twitter:

“#bundil could be the real deal! But the big problem with apps is that almost all fail within 36 months…this guy is going to need A LOT of help! #sharktank”

“OMG, if you have a cryptocurrency app, you should damn well know what cryptocurrency is. Kevin was very generous. More than I would be. This app is trivial- the heavy lifting is done by an off the shelf service and he’s just making a UI for it… and there are competition doing the exact same thing going back four years.”

“Man that dude really looked super miserable when hugging Kevin after giving away 50% of his company. I for some reason feel like he will back out of the deal afterwards when reality hits him.”