Opinion: The price of XRP has been on a tear ever since Ripple announced that xRapid is slated to launch next month. However, a closer look at the XRP Ledger reveals details that may be indicative of xRapid testing.

Over the past 24 hours, the price of XRP has gone up by a whopping 43% accompanied by a rise in the volume over the week from around the $300 million to over $1.5 billion.

There is a very tight correlation between the trading volume and the price, and the former seems to be leading the latter. The market capitalization of XRP is also drawing closer to Ethereum’s, with a mere $2 billion difference between the two.

The rally began with the news of xRapid going live next month as mentioned by Sagar Sarbhai, an executive at Ripple. To understand what xRapid going live means for XRP, it is important to take a deeper look into how it works.

xRapid is Ripple’s offering that allows for real-time cross-border settlement by utilizing XRP as a bridge currency. For example, in a transfer worth $100 million from Japanese Yen [JPY] to US Dollar [USD], the sender’s funds are sent to an exchange.

In this transaction, the reflected market volume for XRP will be $200 million, as the $100 million is sent and received on each of the exchanges.

The entire process takes anywhere from 3-7 minutes, depending on the local payment rails of the sending and receiving parties. The part of the transaction that takes place on the XRP Ledger occurs in 4 seconds, eliminating almost all volatility risk of holding XRP.

Interestingly, there has been a lot of movement in exchange wallets on the XRP Ledger for transfers above 10 million XRP. This movement observed a sharp spike that correlates with the rise in the price of XRP. It is worth noting that these wallets also engaged in the accumulation of XRP prior to big movement. 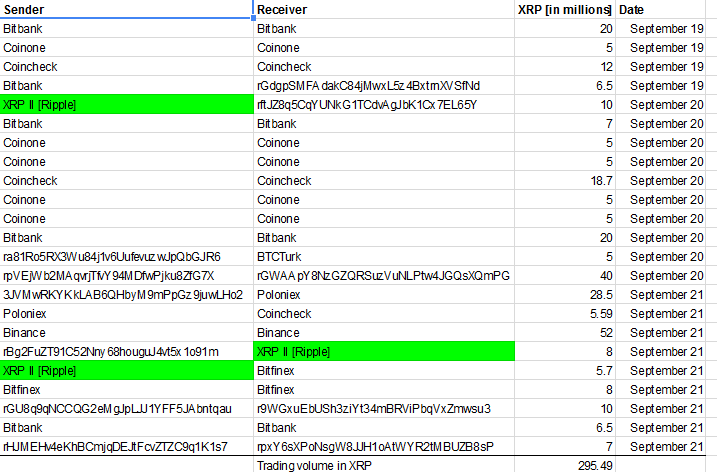 XRP II, Ripple’s registered Money Service Business [MSB] for selling XRP to financial institutions, also features in some of these transactions. Most of the volume is also coming from Japanese exchanges such as Coincheck, Bitbank, and Coinone. Also notable is Binance’s transfer of 52 million XRP to another wallet in their possession.

The combined trading volume of these trades is 295 million over just two days. Whereas big transfers do occur on a constant basis on the XRP Ledger, a concentrated and constant movement is rarely observed. This comes up to around $100 million if the price of XRP is only $0.35, 7 cents below its current trading price.

This might be indicative of test runs for xRapid. While Ripple themselves have not revealed any news, the transparency of the XRP Ledger reveals more about xRapid than they would want to.