The market drop that XRP suffered yesterday seems to be on the upturn as the cryptocurrency saw green on Wednesday, 26th September. 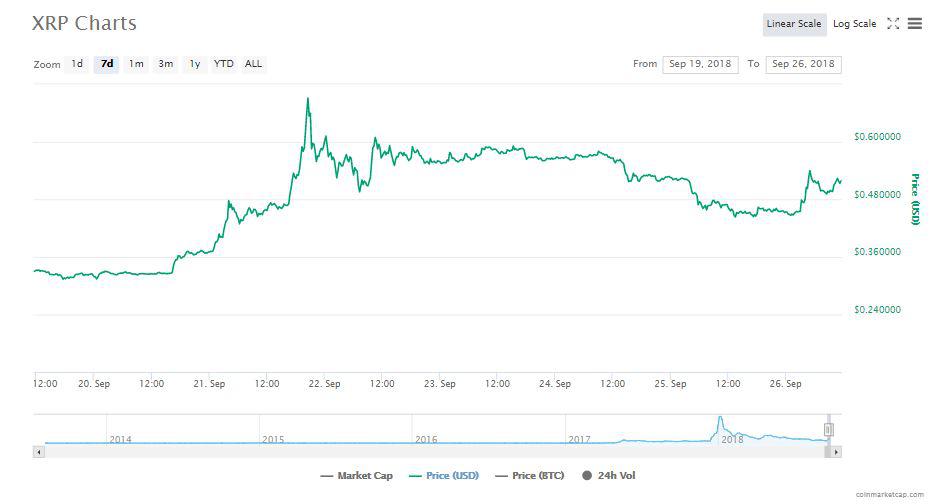 The cryptocurrency’s surge has given holders a reason to rejoice after Tuesday’s crash. CryptoMak, a cryptocurrency enthusiast tweeted:

“Looks like XRP holders will have the last laugh. And this happened before xRapid.Lol’

CoinField Exchange, a Canadian cryptocurrency exchange had also thrown its weight behind XRP when it announced that the company was evaluating the possibility of adding XRP as a base currency for 30 direct cryptocurrency pairs. The expansion plan proposed by CoinField Exchange includes 69 countries with pairings with USD, CAD, EUR, GBP, JPY, and AED.

Adding xrp as a base pair is a very wise and smart business decision you can make. Xrp has a huge #xrpcommunity backing it. If you want success just add xrp and sit back as it will change the financial system that has been outdated for some time. Just add it.

Even some major players in the cryptocurrency space have come out in support of XRP by stating that it will continue to rise. Nigel Green, the CEO and Founder of deVere Group has stated that the cryptocurrency which is currently trading at $0.52 will soon hit the mark of $1. He also added:

“Cryptocurrencies are the future of money and, clearly, XRP is proving to be one of the most useful cryptocurrencies for businesses, organisations and individuals.”