On 14th September Wirex announced that they would start operations in Canada as they were awarded a Fintrac and Money Service Business registration. Cryptocurrency users in Canada can use Bitcoin [BTC], Litecoin [LTC], XRP and Ethereum [ETH] wallets at low fees and reasonable exchange rates. 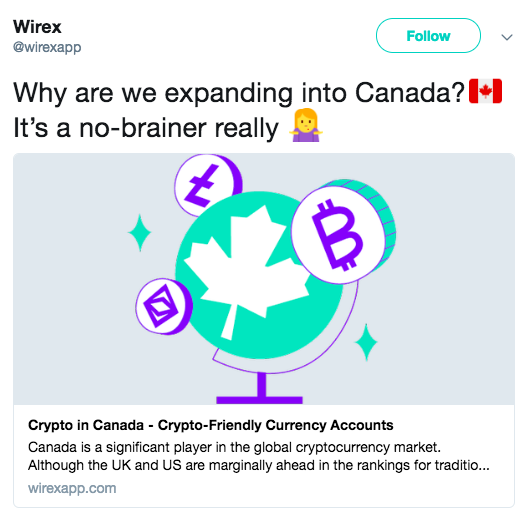 They also claim to allow traditional currency accounts and contactless Wirex Visa cards to convert and spend cryptocurrency just like traditional currency. It can be used in shops, restaurants, bars and online. Wirex has also created a new unique rewards programme through which cardholders can earn 0.5% back in BTC on all in-store purchases with Cryptoback, the world’s first reward programme that pays its users back in Bitcoin [BTC].

The post also revealed that Canada was not new to the cryptocurrency industry. The first ever Bitcoin ATM was launched in Vancouver in 2013. They now have over 600 Bitcoin ATMs. According to a study conducted by the Bank of Canada, 5% of all Canadians own Bitcoin, whereas 12% invested in cryptocurrencies because they did not trust the conventional institutions.

In spite of UK and USA being ahead in the rankings for traditional blockchain adoption, Canada has become a very important player in the global cryptocurrency market, the official post stated. Vitalik Buterin the Russian-Canadian programmer who founded Ethereum is believed to have left a legacy behind which cryptocurrency innovators in the Great White North have been valuing highly.

The recent announcement stated that the energy supply in Canada plays a very important role in marking its importance in the cryptocurrency market. Canada has an energy surplus which is often sold to the USA in exchange for billions of dollars. This surplus energy could be used by cryptocurrency miners. One of the reasons why energy cannot be used efficiently is the regional resistance to the cryptocurrency industry. Philippe Couillard, the Premier of Quebec, has been skeptical about cryptocurrency miners migrating for cheaper energy.

“I’ve been very interested in this product for a while now. Curious how is tax handled when spending cryptos directly? Do you guys keep track of everything for the consumer?”

Cannada had recently approved the regulation of Bitcoin [BTC] Fund and permitted it with the mutual fund trust status, making it the first and only regulated Bitcoin Trust eligible for accredited investors. This would allow investors to get an exposure to Bitcoin without the compulsion of acquiring, storing, or managing it.