Opinion: Recently, the XRP Community is divided among the lines of those who believe in a theory and those who don’t. The theory in question is whether XRP will reach $589 in price before the end of the year. Perpetuated by a party known as Bearableguy123, this prediction has divided the previously united XRP Community over arguments of whether it will happen or not.

Bearableguy123 is rumored to be a Ripple insider, providing many cryptic clues towards the price of XRP. He made multiple predictions over the past year, alluding to partnerships between various companies and Ripple which many claim have come true. His predictions also include price movements on specific days and general advice on when to hold the coin. 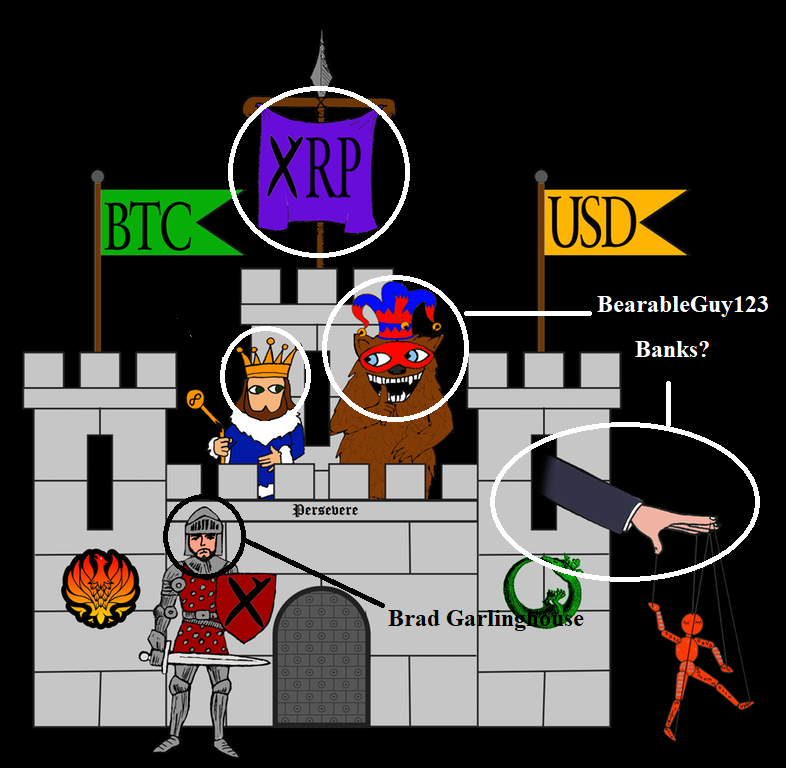 Moreover, BG123 is most well-known for one image, wherein XRP is depicted as being above Bitcoin [BTC] and the USD. There are also multiple unknown figures, including a knight that resembles Brad Garlinghouse, a king without a mouth and a hand puppeting a model of a human. This has led many to believe that Ripple is involved with an ancient banking family known as the Rothschilds, however that theory is unfounded.

What can be measured and reasonably extrapolated, however, is the price of XRP once xRapid goes live. Using this, it might be possible to verify whether the $589 theory holds any weight.

Primarily, the $589 theory has 3 possibilities of occurring, according to the XRP community. The first and most widely discussed method is that the launch of xRapid will push the price of the coin due to a huge increase in trading volume. Second is that the increased burn of XRP as fees in this trading volume will drive the price. There also exist proponents that believe that 58.9 is the atomic number of Cobalt, which is the name of an update that is slated to increase the speed of XRP.

The most likely out of these three is that the launch of xRapid will push the price of XRP to $589. xRapid is Ripple’s fastest product till date for cross-border transactions and utilizes XRP as a bridge currency for transferring between borders. This means that any volume coming from cross-border payments will directly translate as trading volume for XRP, as the XRP needed for the transaction will be purchased and sold on exchanges on the sending and receiving ends of the remittance respectively.

The channel Working Money on YouTube broke down the economics of what would happen if xRapid launched the very next day. He calculated the average daily fluctuation of XRP and the average daily volume of the coin, which came out to 7.25% and $191 million respectively. He then proceeded to hypothesize what the price of XRP would be if Ripple captured 1%, 5%, 10% and 100% of the existing incumbent, SWIFT’s market share.

SWIFT approximately processes $4.7 trillion on every working day. If xRapid took on 1% of this business, the daily volume of xRapid would go to $47.8 billion. Considering that this is over 250x the average trading volume of XRP, it represents around 1,816% fluctuation by extrapolation, presenting a price of $5.56.

By this logic, even if xRapid took over 100% of SWIFT’s system, which is a statistical improbability, the price of XRP would fall short of the prediction, coming in at around $526.

However, Ripple’s CTO, David Schwartz, also commented on this about 10 months ago. When asked about how high the price of Ripple would go, he stated:

He also debated the likelihood of this phenomenon, saying that no one could say where the price would go. However, he did state:

“Ripple equaling bitcoin’s current market cap sometime in the near future doesn’t seem any more outrageous to me now than the idea of a bitcoin selling for over $1,000 seemed to me in 2012.”

In all views, it does not seem possible that the price of XRP would hit $589 by the end of this year, seeing as how there are a lot of factors that need to occur before the price jumps up that high. Moreover, the launch of XRP will not necessarily push the price of XRP immediately, as multiple regulatory hoops may need to be jumped through before XRP is utilized fully for cross-border payments.

The post Will XRP go to $589 after the launch of xRapid? Bearableguy123’s theory tested appeared first on AMBCrypto.