On 15th September, Alexander Tapscott, who is a globally-recognized writer, speaker, investor and advisor in the blockchain and cryptocurrency space, tweeted about the trading volumes of Bitcoin on LocalBitcoin in Venezuela. According to him, the volume of the cryptocurrency has skyrocketed due to increased trading activity on the platform. 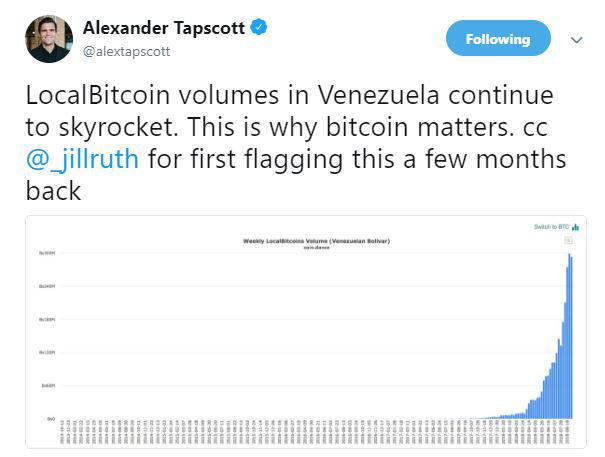 Earlier this year, the Venezuelan government headed by President Nicolas Maduro, launched the country’s own cryptocurrency called the Petro. It was previously reported that President Maduro managed to raise a capital worth $735 million on its first day of pre-sale. The cryptocurrency was launched as a response to the harsh crisis faced by the country in terms of economics and politics.

Recently, a scandal occurred surrounding Petro wherein it was alleged that the cryptocurrency has several deep flaws. Furthermore, Petro does not have any reported use cases in Venezuela and a heavy investment amount to around $20 billion went unaccounted.

Earlier this week, President Maduro announced that he will be linking the Venezuelan cryptocurrency with its fiat currency to solve the issue of hyperinflation. Maduro plans to give seven of the country’s oil fields to 14 companies in order to boost the production of oil. The name of the new currency is said to be ‘Sovereign Bolivar’.

However, during this week, the general status of Bitcoin trading volumes on LocalBitcoin experienced a dump. Here, the volume slumped wherein only about 864 BTC was traded over the week, as shown on CoinDance. This is considered to be the lowest trading volume that the platform has seen in a long time.

Max, a blockchain and cryptocurrency enthusiast commented on the graph, saying:

“Would be interesting to see the volume in BTC terms, as the Bolivar lost most of its value”

Here, Tapscott responded with a chart of trading volume in BTC.

“Here it is in BTC. I would argue that given the collapsing purchasing power of the Bolivar over the past year, it’s amazing its as high as it is when denominated in BTC, given localbitcoins is presumably mostly Bolivar for BTC purchases.”

“Using a collapsing Bolivar the chart is hugely deceptive. Someone should $USD adjust it.”