On 19th September, Justin Sun, the CEO of Tron announced on Twitter that TRX will be listed on BitBay. BitBay is a trading platform which facilitates the exchange of major cryptocurrencies like Bitcoin, Litecoin, Ether, and Lisk. They also announced the listing TRX/BTC, TRX/EUR, TRX/USD, TRX/PLN trading pairs.

This listing would allow both the platforms to establish a mutually beneficial partnership through which they will adopt the use cases of blockchain technology.

BitBay exchange was founded in 2014 in Poland and is the third largest cryptocurrency exchange in Europe. With one million users worldwide and more than one hundred employees, the exchange has a market share of more than 70% in Poland. 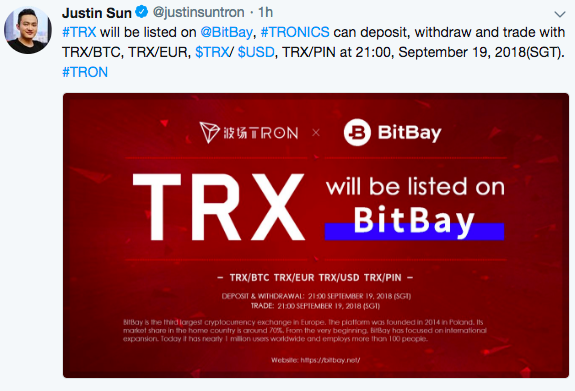 BitBay’s agenda is to create an exchange platform which is nowhere available in the Polish market, especially for buying and selling BTC and LTC.

According to Justin Sun’s post on Twitter, Binance, the worlds largest cryptocurrency exchange by trading volume had announced TRX/BNB [Binance Coin] trading pair on the platform. Binance Coin [BNB] was launched by the cryptocurrency exchange to create incentives in trading. BNB allows the traders to get an appreciable amount of discount on the trading fees on the site.

“Okay this is the best news tron has given me this year. Now funds are #Safu We love you @justinsuntron xoxo #trx #moon #bnb”

TRX listing was recently announced on SatoWallet, an exchange platform which holds more than 60 cryptocurrencies and also claims to provide offline transactions for their new and existing users. TRX was also listed on CoinSwitch which is a single exchange platform to trade cryptocurrencies at the best prices across all exchanges. They also support more than 300 currencies and 6000 currency pairs, which is one of the highest in the world.

The post Tron [TRX] listed on BitBay which controls more than 70% of the market share in Poland appeared first on AMBCrypto.