After seeing a 114% rise in the last week, XRP seems content to rest at the price brought about by its correction. Upon closer inspection, it is apparent that the coin is resting at an important resistance which can make or break its next run.

The Stochastic Momentum Index is below -40, which is generally indicative of an oversold asset. Moreover, this is considered to be a bearish sign. 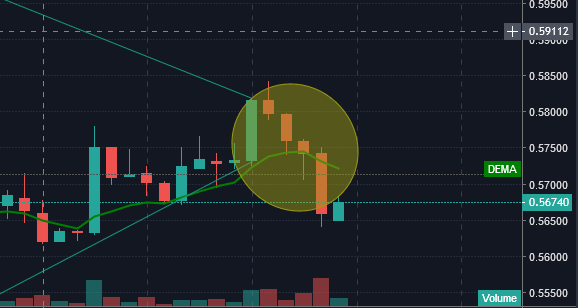 The DEMA is at $0.57, and provides a key resistance for the next run as evidenced by the candles bouncing off it multiple times.

The MACD is slightly above zero, and is diverging with the MACD line above the signal. The histogram is also exhibiting a slight upwards movement, signifying a shift in the market.

The 20 hour MA is providing a resistance at $0.57, and will yield a bullish movement if broken.

The support levels in case of the next drop will be at $0.47 and $0.31 as evidenced by the trend lines that hold these levels. In case of a hike, the level to break will again be $0.57.

The 20-day Exponential Moving Average is lagging behind the price at $0.39 and should provide a key support in case the price drops.

The $0.57 level presents itself as a key resistance yet again, as a break in this level would indicate a shift in the long-term trend that has presented itself since the end of May.

The $0.56 level provides a fallback for the price and may see itself being extended in case of the continuation of the trend.

The RSI is overbought at 80, likely owing to the recent price hike. The volume oscillator is also presenting a decline in combination with the sideways movement of the price, and also reflects the correction seen after the strong upward movement.

The post Technical Analysis [XRP/USD]: Price rests at crucial level as bears wait to take over appeared first on AMBCrypto.