The past two weeks have been quite bullish for Monero [XMR] with prices surging way above 14%. The somber bearish market doesn’t seem to have deterred the cryptocurrency from rising again. On 15th September, XMR went up by 8.88% with the price of $121.35. 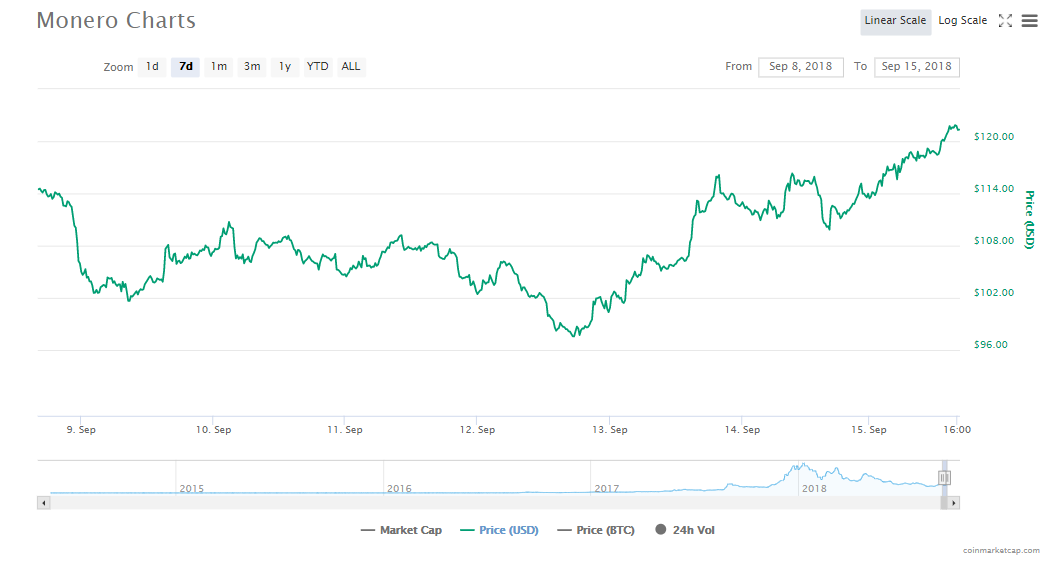 According to CoinMarketCap, the digital asset has a market capitalization of $1.9 billion with a 24-hour market volume of $44.9 million at the time of writing. Also, XMR has gone up by 6.68% in the past week.

Cryptocurrency exchange, HitBTC holds quite a chunk of XMR’s trading volume with over 26% of the trade taking place on the platform. The 24-hour volume on HitBTC amounted to an astounding $11.9 million.

The privacy coin’s constant bull run in the past two weeks has occurred around the same time when XMRWallet, a platform that provides an open-source web environment for a user’s Monero wallet, first announced the release of a new website-based wallet for the privacy browser, Tor. According to BitInfoCharts, the Monero network’s hash rate increased to a great extent within the past three weeks as well.

In a recent report published by Satis Group, an ICO advisory firm consisting of a board of digital assets advisors, the platform predicted that Monero could witness an outpour of demand from investors with the price of the coin increasing to at least $18,000 within the next five years.

“Meanwhile, Monero looks like it can establish a healthy one-month uptrend.”

“No surprise that Monero $XMR is a winner the way that it is. Good technology that actually works is usually going to bring good things to fruition.”

“Only DASH and XMR posted gains showing a trend Reversal. Buy them on dips for faster returns.”

Earlier in August, Monero announced that the Ledger Nano S Wallet could be used with the latest version of Monerujo – version 1.6.3. Monerujo is an open source mobile application that allows users to manage and use the Monero Wallet.