On 13th September, Michael Novogratz, a former hedge fund manager and the Founder and CEO of Galaxy Digital Capital Management, stated that the price of cryptocurrencies has hit a bottom. He conveyed his revelation via a tweet that encompassed the Bloomberg Galaxy Crypto Index [BGCI]. 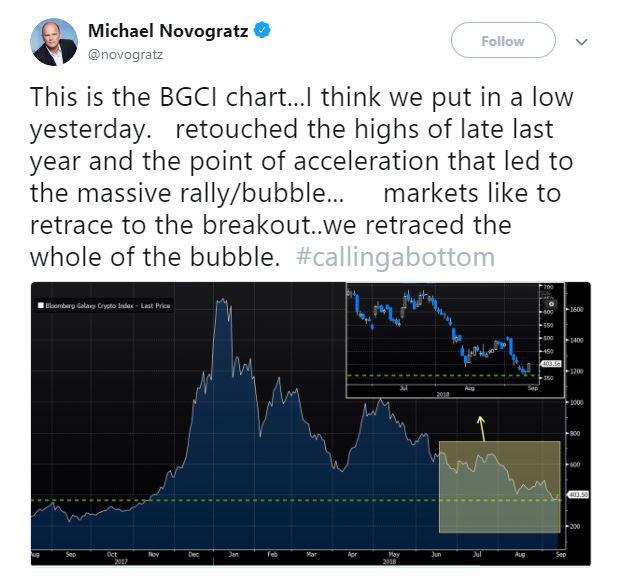 BGCI is an assessment partnership that was set in place by Bloomberg and Novogratz’s Galaxy Digital Capital Management. The main aim of the BGCI is to track the properties of the top ten cryptocurrencies and then extrapolate the data to the entire market.

Novogratz based his comments on the fact that the charts “retouched the highs of late last year and the point of acceleration that led to the massive rally/bubble.” The former hedge fund manager was positive in stating that the retracing of the bubble was completely taking the cryptocurrencies back to the point before the massive bull run started. Novogratz’s statements were directly similar to what Tom Lee of Fundstrat had stated during the Ethereum Classic Summit. Lee said:

“I think we can safely say that the worst is over. If you compare the market crash of ’08 with the recent bearish run on the crypto market, we see points where the market returns back to the same point it held before the massive bullish spike, in this case the massive shoot up of 2017.”

Michael Novogratz’s announcement tied up with a bullish rise in the cryptocurrency market, with most of the cryptocurrencies seeing green on the charts. At the time of writing, Bitcoin [BTC] was enjoying a 2.05% growth and was trading at $6558.90. The most famous cryptocurrency also held a market cap of 113.25 billion with a 24-hour market volume of $4.34 billion. Bitcoin [BTC] and Ethereum [ETH] had undergone a tumultuous past couple of weeks after the Security and Exchanges Commission of the US had shut down the Bitcoin Tracker one and Ethereum tracker one.

Novogratz’s words resounded with Ethereum holders and fans after the bullish atmosphere saw Ethereum [ETH] shoot up by 15.85%. At press time, ETH was trading at $219.12 with a total market cap of $22.34 billion.

Michael Novogratz’s tweet was met with some comments with CryptoG, a cryptocurrency enthusiast saying:

“No way to stop decentralized things like this. Has the government been able to stop torrenting? No its been growing and growing for the last 10 years. Decentralized networks growth doesnt slow down if anything it speeds up.”

“This is a loaded spring waiting to blow. The run back to $20k will happen in a blink once it gets moving.”

The post Michael Novogratz predicts the cryptocurrency bottom, says the bearish tunnel is almost over appeared first on AMBCrypto.