The market saw a bearish streak as it opened on Monday, 17th September, with most coins seeing red on the cryptocurrency charts. Litecoin [LTC], which has seen something of a resurgence after a 3-month low point on 12th September when it fell to $48.44, was trading at $56.37. The cryptocurrency was enjoying a 7 day bullish run of 2.39% with a total market cap of $3.289 billion. 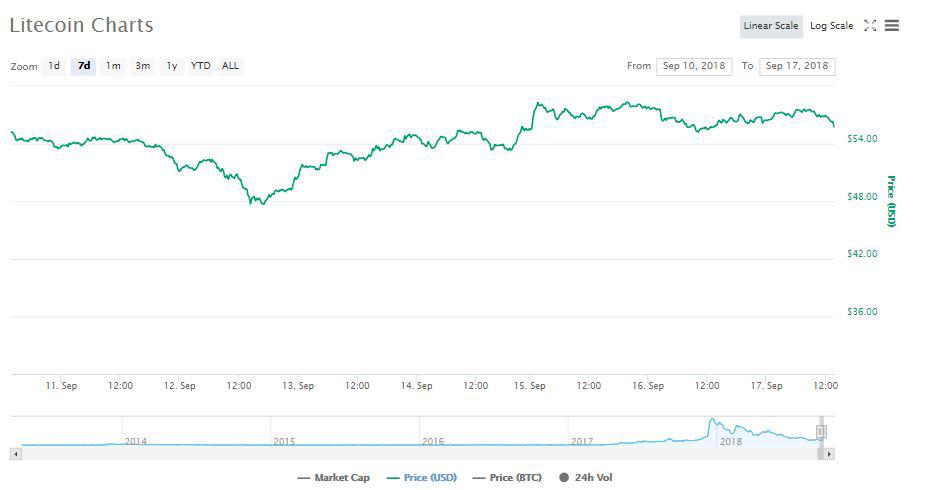 The noticeable thing about Litecoin’s trading volume was that most of it was coming from a relatively unknown Chinese cryptocurrency exchange called DOBI trade.

The exchange held a total Litecoin trade volume of 26.12% encompassing a 24-hour market volume of $101.741 million. According to CoinMarketCap, DOBI trade majorly dealt with EOS and Ethereum [ETH], with both the cryptocurrencies trading on the platform with a split share of 40.70% and 35.30% respectively.

Popular exchanges like Bitforex and Coinbase Pro, which held the lion’s share of most of the other cryptocurrency trade volume were left behind in the dust with BitForex occupying just 2.33% and Coinbase Pro holding 1.62% of Litecoin trade.

DOBI trade was also in the news when the exchange partnered with Chuangyu, a Chinese technology company. The reports from the company stated that the main aim of the partnership was to create a new financial technological ecosystem to boost the blockchain industry.

Litecoin was also in the news recently when Charlie Lee, the Founder of the cryptocurrency had explicitly stated: “It would have sucked if I hadn’t sold”. Lee had said that the only reason he created Litecoin was so that there existed something in the market that was governed by fair policies and enabled it to become a global currency.

His statements were also backed by Roger Ver, the CEO of Bitcoin.com and one of the proponents of Bitcoin Cash [BCH], who had said:

“People should start trading in Litecoin rather than the failing Bitcoin.”

Litecoin got another boost in its mission towards mass adoption when Wirex, a famous cryptocurrency wallet expanded to Canada, added the coin to its list of tradeable cryptocurrencies. The roster of cryptocurrencies also included Bitcoin [BTC], Ethereum [ETH] and XRP.