Litecoin [LTC] has taken over Bitcoin [BTC] in terms of SegWit adoption, as it the percentage of blocks utilizing SegWit nears 50%. This comes after a sudden drop was seen in the use of SegWit on 3rd September.

The drop occurred when Litecoin’s number of daily transactions spiked up from around 25,000 to 75,000. This led many to believe that there was a large volume of low-frequency transactions that occurred without the activation of SegWit on them. Relatively, this would be listed as a drop in the percentage use of SegWit transactions, as seen on the graph.

Charlie Lee, the Chairman and Managing Director of the Litecoin Foundation, recently tweeted about the event, stating:

“Litecoin SegWit usage overtakes Bitcoin and nears 50%. Thanks @Blockchair for compiling this data. Check them out. They have a very cool SegWit-aware block explorer for Litecoin.” 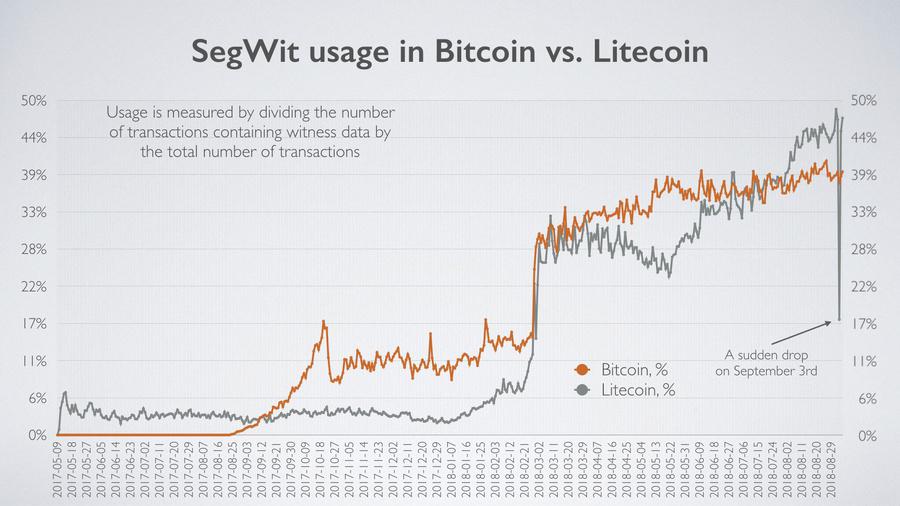 SegWit is short for Segregated Witness, and is a protocol update made for the Litecoin and Bitcoin blockchains. It removes the witness data, which is the part of the transaction that holds signatures, and moved it outside the block. This, along with potentially scaling the blockchain, allowed for the fixing of transaction malleability.

This paved the road for layer-2 scaling solutions, as it fixed the flaw where bad actors could change the transaction ID and subsequently the whole block. It also made it possible to fit more transactions into a block, thus increasing the general transaction throughput of the blockchains.

The percentage of Bitcoin transaction that utilize SegWit has stayed under 40% since the activation of the technology, even though SegWit users are paying only 20-30% of all fees on the blockchain.

The case is different with Litecoin, however, as SegWit is used more than it is on the Bitcoin blockchain. As noticed by Charlie Lee, usage is in the high 40%, slowly moving towards 50%. This means that almost 50% of the transactions conducted on the Litecoin blockchain are utilizing SegWit for their transactions.