Earlier this week, the Litecoin Foundation conducted a stress test for the Litecoin [LTC] network by sending 0.1 LTC to 1,263 addresses at the Litecoin Summit. This was primarily to promote the campaign called #PayWithLitecoin that was aimed at increasing the merchant adoption of the cryptocurrency.

A popular Litecoin fan Twitter handle, The Litecoin School of Crypto released a report wherein all the details regarding the bulk transactions has been provided, including the statistics and the takeaway. The transactions were initiated by Loshan, an LTC developer who completed the transfer of funds in just two transactions using a script. He did this by using the concept known as batching. 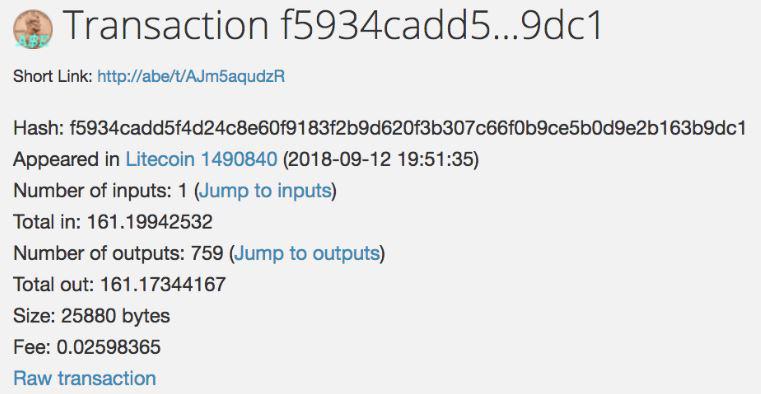 Liteschool.com stated that the technique is available for anybody to execute as this service is offered by several popular wallets, such as Electrum-LTC, which has the pay-with-many feature. However, Loshan used Litecoin to make the batched transactions.

Switching to the duration aspect of the transaction, liteschool.com stated that it only took 0.5 seconds to broadcast a transaction holding over 750 addresses. Therefore, it took merely a second to make payments to a total of 1,263 addresses.

Recently, Litecoin also saw adoption by many cryptocurrency exchanges, the latest addition to the support being Bittrex. The platform opened Litecoin for the USD market earlier this month. Furthermore, the Litecoin Founder Charlie Lee thrusts more significance on the adoption aspect of the ecosystem rather than markets and price speculation. According to him, a short-term market value is not worth attending to, as he believes in long-term achievements.

Sam Samskies, a Twitter user and a cryptocurrency space enthusiast on the study commented:

“I had no idea there were wallets that allowed you to send to many. Anyone know if any hardware wallets allow you to do this or plan to add this feature?”

Here, The Litecoin School of Crypto responded. It said:

“Would definitely be a nice feature.”

“Now that is Lightning Fast to #PayWithLitecoin to near 800 people. Boom Shakka Lakka > 4. According to Loshan, it took less than 0.5 seconds to create and broadcast a batched a transaction to 759 addresses.”