On 1st September, IoT based blockchain platform IOTA [MIOTA] released a post sharing the team’s development update on their official Twitter handle. The update is presented by developer Hans Moog. In an elaborate Medium post, the techie speaks about the concept of local snapshots. 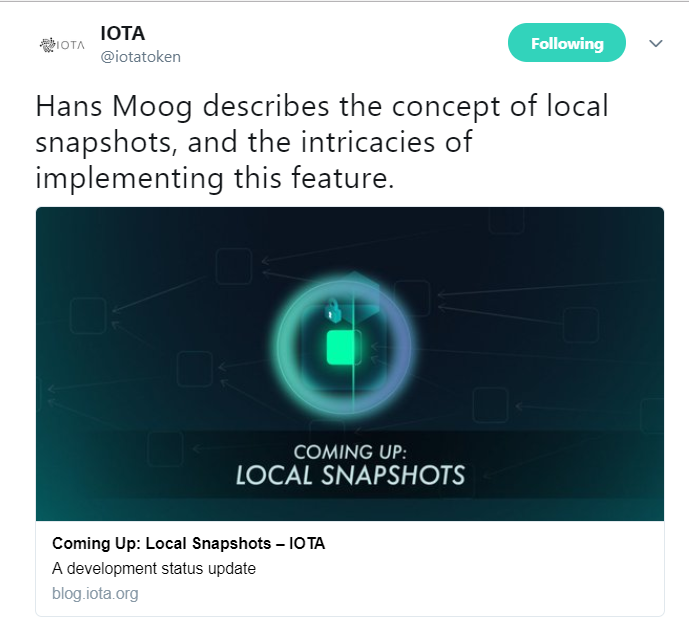 According to the blog, the foundation has been seeing a lot of activity lately, with several developers adopting IOTA Tangle to implement solutions to real-world problems. Furthermore, Hans Moog stated that the increase in usage has led to an increase in database size. He also added that it may raise problems for nodes with limited hardware resources.

The developer reveals that the company has been obtaining global snapshots during regular periods of intervals. The process involves pruning the transaction history. Next, he stated that the ‘resulting balances are consolidated into a new genesis state that allows nodes to start over, with an empty database’.

He further added that the team was required to temporarily stop the coordinator, generate the snapshot state, allow the community to verify the generated files and in the end restart the coordinator. The steps proved to be impractical with the growing ledger size, he mentioned.

As a solution, Moog stated that the IOTA team has been working on the concept of local snapshots. The project has been IOTA’s central roadmap, he added.

The team has begun testing the feature internally reviewing all the implemented changes and it further plans to gather sufficient metrics about the behavior of local snapshots.

Hans Moog also posted a screenshot of the console output obtained from their internal analysis.

Additionally, Moog attempts to summarize the new features that it offers to node operators. The points are summarized below:

Moog further adds that this feature allows nodes to handle thousands of transactions per second, without the database size posing as a problem. Moreover, he added that in a theoretical sense, the nodes could run for years without the need for maintenance.

Moog also mentions that the entire process will be automatically repeated to allow the nodes to run parallel with a constant space requirement without requiring additional maintenance.

Lastly, he concluded by saying:

“The upcoming feature of Local Snapshots will not just solve the space problems that arise with the growing adoption of IOTA, but will also simplify the setup of new nodes and allow organisations and community members to operate permanodes”.

He also added that the feature will be up for beta testing in the weeks to come.