On Monday, 3rd September, the severely bearish market saw a sudden bullish rise by a surprise candidate, Holo [HOT]. The sudden surge was made even more prominent with the top fifty cryptocurrencies seeing all red on the charts. Even major cryptocurrencies like Bitcoin [BTC] and Ethereum [ETH] were affected by the bearish market. 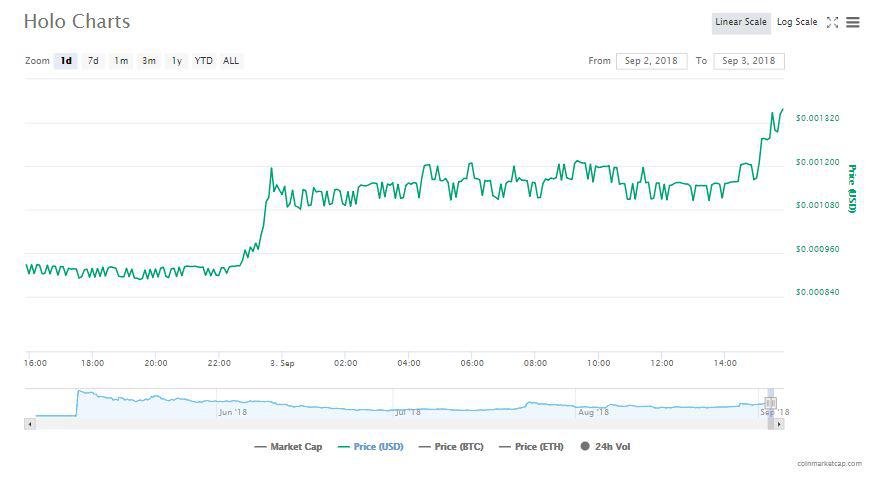 On the other hand, at press time, Bitcoin was sliding at a rate of 0.50%, an exact reflection of the bear market. BTC was trading at $7237 and held a market cap of $124.828 billion. The cryptocurrency, with a 24- hour market volume of $3.832  billion, was still miles ahead of its counterparts in terms of sheer market share.

Ethereum, Bitcoin’s competitor was affected the most in the top five cryptocurrencies, falling at a rate of 2.03%. At the time of writing, Ethereum was trading at $288 with a market cap of $29.296 billion.

Holo’s sudden rise was met with a lot of expected surprise with Chricky Chambers, a Twitter user commenting:

“Can anyone explain what is happening with #Holochain $HOT??Starting to pump or what????”

“People discovering the project and getting onboard. Honestly, this is what the world needs.  Impossible to read the green and white papers and not have a “holy shit” moment #holochain”

“Holochain enables a distributed web with user autonomy built directly into its architecture and protocols. Data is about remembering our lived and shared experiences. Distributing the storage and processing of that data can change how we coordinate and interact. With digital integration under user control, Holochain liberates our online lives from corporate control over our choices and information.”

The post Holo [HOT] sees a spike of 55.15%, fans of other cryptocurrencies left scratching their heads appeared first on AMBCrypto.