On 10th September, the Winklevoss twins, on their official Twitter handle, introduced a regulated stablecoin “Gemini Dollar” built on the Ethereum platform in accordance with the ERC-20 standard.

In a Medium blog post, Cameron Winklevoss unveiled the token of “Gemini Dollar,” and explained in brief about the coin.

“We are excited to bring the Gemini dollar to market and provide a crucial link between the traditional banking system and the new, rapidly growing crypto economy. With the Gemini dollar, we continue to deliver on our mission — to build the future of money — and help transform the global financial system to enable possibilities previously unimaginable. ” 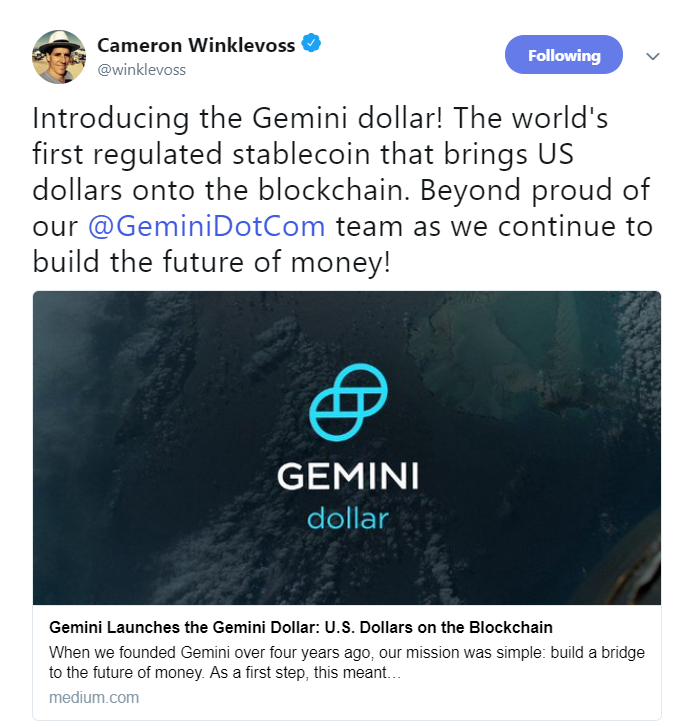 The coin has been approved by the New York Department of Financial Services. According to a statement issued by a spokesperson of the company, the Gemini Dollar is all set to launch next week and will be traded on multiple exchanges. The Winklevoss’ Gemini Dollar is up against the stablecoin Tether [USDT], which is presently the dominant in the stablecoin space.

In an interview with CNBC, Tyler Winklevoss, Co-Founder and Co-CEO of cryptocurrency exchange Gemini argued that existing stablecoins have issues with transparency and oversight.

“I don’t think any of the offerings do an adequate job in solving the trust problem. This [Gemini dollar] is the world’s first regulated stablecoin.”

In an interview with Business Insider after the launch, Tyler Winklevoss spoke further about the project and crypto space in general.

When asked about the journey of Gemini Dollar from its evolution to fruition, Tyler Winklevoss said that the concept of stablecoin has been the duo’s mind for over a year. According to him, the main attraction behind this is that the coin behaves differently when compared to other digital assets.

Regarding the problems the stablecoin tackles, Tyler stated that they saw two problems they wanted to target, the technical implementation and the trust factor. He stated:

“As a trust company, we are regulated by the state of New York, but the trust problem doesn’t start or stop there. It is about building a network of trust among all participants in the ecosystem. Multiple eyes are looking over it.”

Tyler said that getting ready for an approval takes a long time. Tyler further stated that they had been engaging themselves with their clients including retail, prop shops, market making firms, and trading firms. He said:

“There is a lot of demand there. We thought a stable coin was important for the ecosystem. But we also have seen a lot of demand from those clients. And so basically bringing USD onto the blockchain is key here.”

He explained that the use case identified for a trader is being able to move capital around in an efficient matter.

According to Tyler, in order to push the ecosystem forward, they will have to look at doing business outside of trading, including custody or venture. He added:

“If we want compliance departments at banks to get comfortable then we have to speak their language. Whether that means the right internal controls or a SOC2 designation, then that is what it means.”

When asked if the company was speaking to merchants like Starbucks to get Gemini dollars to become digital cash, Winklevoss stated that the people lived in a time when they did not know if Bitcoin [BTC] could kill the traditional system and money. The general belief is that Bitcoin cannot be used to buy Starbucks or a happy meal, he said. He further explained:

“The question is actually does it disrupt gold or exist side-by-side precious metals in a portfolio? The beauty of a stable coin is you don’t need to worry about spending it. And groups don’t need our permission to use it. Starbucks could accept it if they wanted to. And we will be open to those conversations.”

Michael Moro, the Chief Executive Officer of Genesis Global Trading, said to CNBC that his firm is still not exposed to stablecoins but believes that the potential use case is much greater than just being used on exchanges.

“Look at this bitlord. This is great news. “In addition, the U.S dollar deposit balance will be examined monthly by an independent registered public accounting firm to verify the 1:1 peg.”