The past one week has been a tumultuous period for the cryptocurrency sector with coins falling at an accelerated pace and without any warning. The biggest loser over the past week was Ethereum [ETH], with a massive drop of 32.06%. What made the dismal drop stand out in such a stark manner was the fact that Ethereum suffered the biggest fall among the top 40 cryptocurrencies.

At the time of writing, according to CoinMarketCap, Ethereum [ETH] which still holds the 2nd spot on the cryptocurrency charts was trading at $196.89 with a market cap of $20.057 billion and dropped by 2.88% in 24-hours. Bitforex held the bears share of the ETH trading volume, with a coverage of 38.29% of all Ethereum transactions. The 24-hour market volume on Bitforex was $1.132 billion. 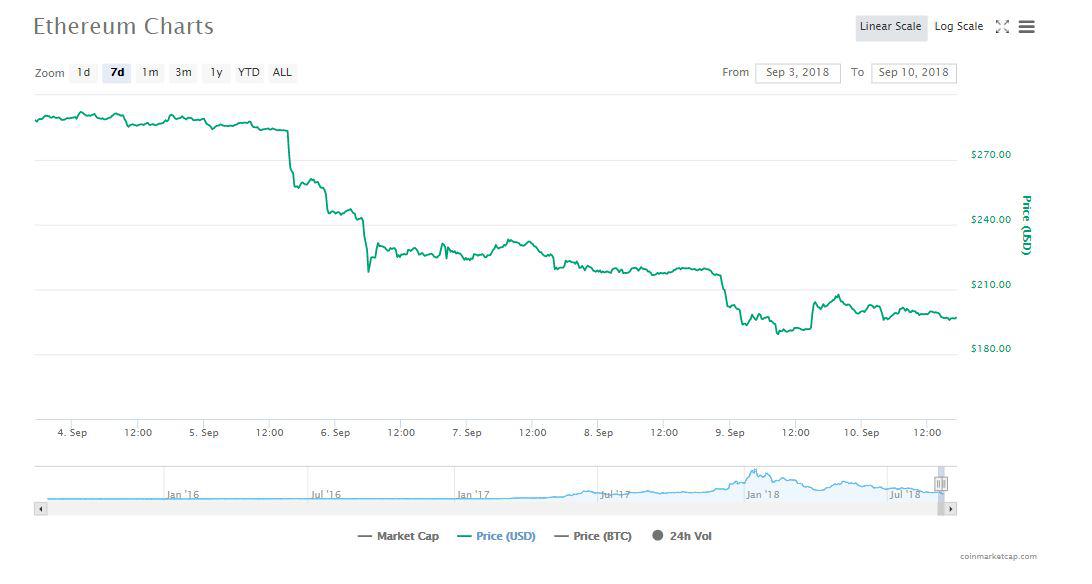 Bitcoin [BTC], on the other hand, was falling at the rate of 1.15% with a weekly drop of 12.91%, a figure that was the second best among the top ten cryptocurrencies. Tether [USDT] was the best performer of the previous week, having a 24-hour gain index of 0.16%.

At press time, Bitcoin was trading at $6327.13 with a total market cap of $109.205 billion. Experts have stated that the rampant crash that occurred four days back was because of the market link between Bitcoin and all the other cryptocurrencies. Bitcoin, on 6th September, had crashed twice in a twenty-four timeframe to trade at a relatively low value of $6400. The flash crash came in the wake of the first fall that had bought the value of BTC from $7300 to $6900.

On the same day, Ethereum fell at a rate of 10.73% when the value of the ETH token fell from $283.40 to $258.34 in a matter of just thirty minutes. Ethereum was also in the news recently when Bitcoin and Ethereum exchange-traded notes [ETN] were suspended by the United States Securities and Exchanges Commission [SEC]. The body had stated:

“The Commission temporarily suspended trading in the securities CXBTF and CETHF because of confusion amongst market participants regarding these instruments.”

An Exchange Traded Notes is basically a form of security that is issued by a banking body to bring it under the ambit of the SEC. This entity has its own asset package that gives the ETN its own value and this asset package is under the purview of the institution offering the entity.

The post Ethereum [ETH] bleeds the worst among the top 40; weekly drop of 32.06% shocks community appeared first on AMBCrypto.