On 4th September, Wirex, a platform for users to manage digital assets as well as traditional currency announced its support for the 2nd largest cryptocurrency, Ethereum [ETH]. Ethereum has been added to the Wirex portfolio of cryptocurrencies and an Ethereum wallet for the same will be available for the users. 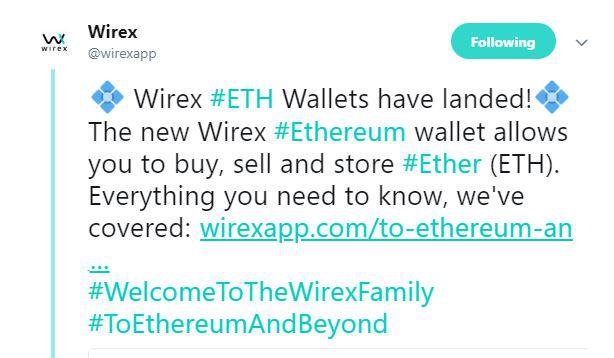 Currently, the users can convert their ETH to GBP, EUR and USD for in-store spending or paying online via Wirex payment card. Wirex, in its official announcement also wrote about the new things that can be done with the ETH wallet on its platform. Some of them are, selling, exchanging and depositing ETH via the app, exchanging altcoins and initiating free cryptocurrency transactions among Wirex users.

Additionally, the blog discussed Ethereum’s defining feature, smart contracts, stating that they facilitate developers to create and run decentralized applications. Smart contracts self-execute themselves distinguishing themselves from the traditional contracts.

Subsequently, Wirex mentioned Decentralized Autonomous Organizations [DAO] that are backed by smart contracts on blockchains similar to Ethereum. The DAO, as called by the community, was developed as a venture capital arm for the decentralized cryptocurrency space. However, it faced a loss of about 3.6 million ETH [=$70 million, then] during a hacking attack in June 2016.

The Ethereum blockchain is also associated with an alliance called the Enterprise Ethereum Alliance [EEA], which was formed as a way of networking for industry institutions such as startups, academia, technology vendors and even Fortune 500 companies. Some of the big companies involved in this alliance are CME Group, Infosys, Ernst & Young. Intel, J.P.Morgan, Shell, Accenture, among others.

The aim of the EEA was to work on the cost for local customers, introduce interoperability into the ecosystem, launch support from multiple vendors and suchlike.

A Twitter handle named Chocolate Lover, who is also a Wirex and ETH user on the announcement commented:

“Not showing in the app yet. Any idea when it will be live?”

To support the query, Wirex replied suggesting a solution. It said:

“Have you tried refreshing your App updates? It comes up after you scroll your finger down from the top to refresh. Hope that helps!”

The thread continued when the same user replied back, stating:

“Not sure if you mean when in the Play store or in the app itself but I have tried both and I can’t swipe down, or at least when I do nothing happens.”

Post this, the two parties took to direct messaging as mentioned in the comments.