The Altcoin rise has always been a priceless moment for all the hodlers in the ecosystem. The imperceptible growth of the crypto market since the past two days seems to be a positive sign for the next bull run. Though Bitcoin [BTC] is striving to surpass the $7,200 mark, the altcoins are showing a massive surge at present. Bitcoin Cash [BCH] and EOS has outperformed the market toppers by 15.95% and 32.87% respectively in the past 7 days. Also, BCH is the current winner in the top 5 during the past 24 hours with a 14.65% hike.

However, the talk of the town continues to be the meme coin of the ecosystem, Dogecoin [DOGE]. According to CoinMarketCap, the cryptocurrency has surpassed most of the major altcoins including Nano, Ontology [ONT], and Lisk [LSK] to secure the 21st position with respect to the market cap.

Speculations among the crypto community continues to rise with DOGE’s price hike. The discussion regarding the cause of this sudden surge has been revolving around the recent announcement of the ongoing ‘Dogethereum‘ project and some of the exchange listings.

Dogethereum is a smart contract which creates a bridge between DOGE and the Ethereum network by enabling the transfer of DOGE on the Ethereum chain.

“The whole Ethereum thing is a non-thing for Dogecoin. Please do some research before you spread the hype, FUD and FOMO.”

According to recent reports, DOGE/USDT pair was added to the cryptocurrency exchange, Poloniex. Post the announcement made by the exchange platform, the value of the coin showed a massive hike from its previous price. The newly added trading pair has also shown an enormous growth in the market cap of Tether [USDT] on CoinMarketCap.

“Such wow! $DOGE is on fire! We are happy to introduce @dogecoin in our new release. Dear Shibes, download the app and enjoy http://AtomicWallet.io“

AtomicWallet is a recent project released by Konstantin Gladych, the Founder of the famous cryptocurrency exchange platform, Changelly.

“Shibatoshi is the real Satoshi “

At 9:00 PM UTC, DOGE is trading at $0.00582 with a market cap of $675 million. The coin has seen a 144% and 33.5% hike in the past 7 days and 24 hours respectively. DOGE closed the month of August at $0.004 and jumped to the current value within a span of a day. The coin crossed the 0.006 resistance level several times during the day. As it is being noticed, DOGE continues to trade the most against Tether [USDT] on the Cayman Island based exchange, Gate.io at $0.0061. Currently, DOGE/USDT is the top trading pair on Gate.io.

According to TradingView, the daily MACD of the DOGE/USD trading pair continues to be in the bullish zone. 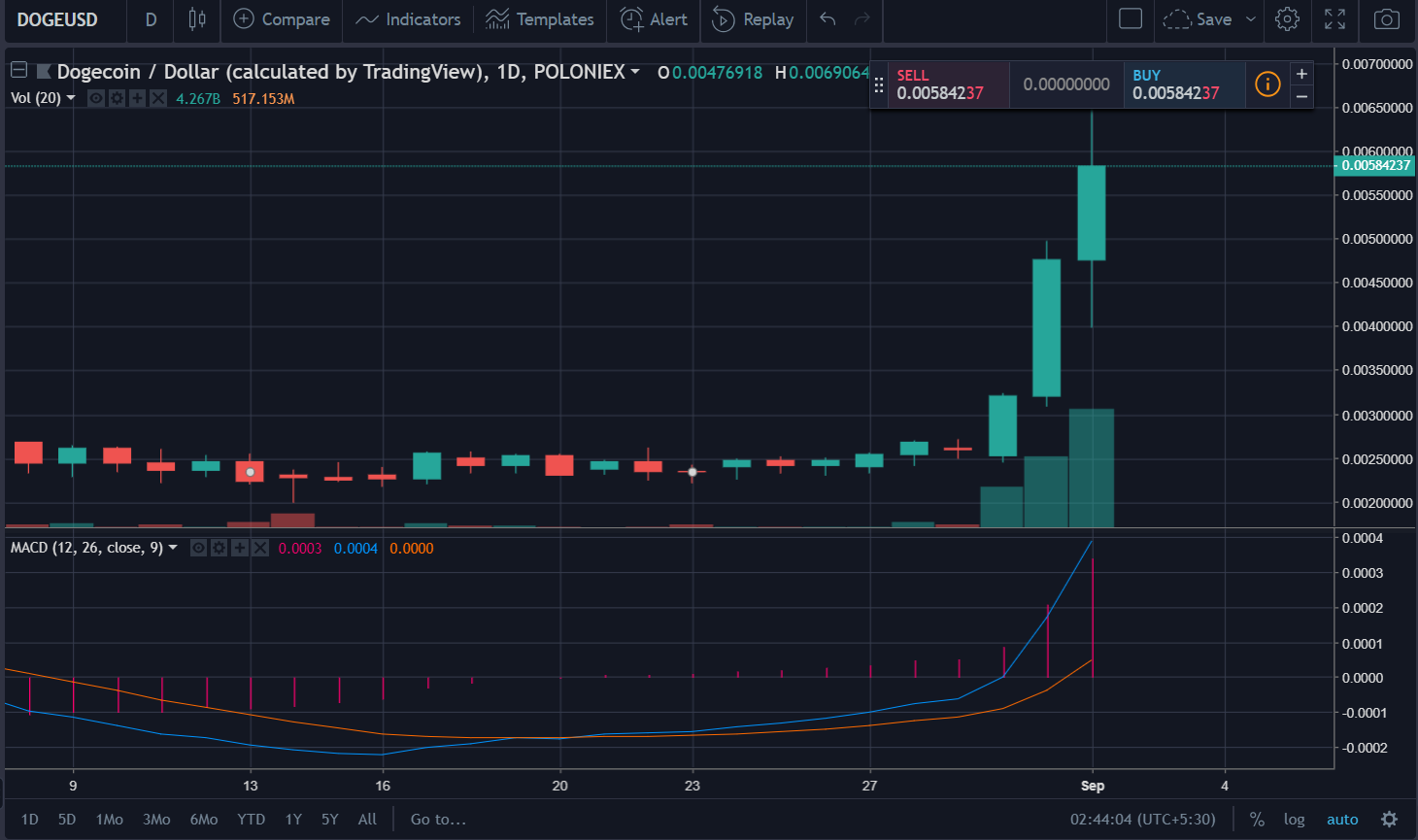 The post Dogecoin [DOGE] on a roll: The one man army to conquer the crypto empire? appeared first on AMBCrypto.