Dogecoin [DOGE]’s stellar run over the past few weeks seem to have come to an end as statistics from CoinMarketCap show that the cryptocurrency has become the biggest loser among the top 50 cryptocurrencies.

At the time of writing, Dogecoin was trading at $0.005 being on a 7-day bearish slide of 8.14%. DOGE held a market cap of $661.543 million and a 24-hour market volume $20.965 million. Most of the cryptocurrency’s trade volume was coming in from Gate.io, a Chinese cryptocurrency exchange. Gate.io’s 20.68% majority was a stark contrast to the exchange in second place, HitBTC, which held a total volume of 12.58%. 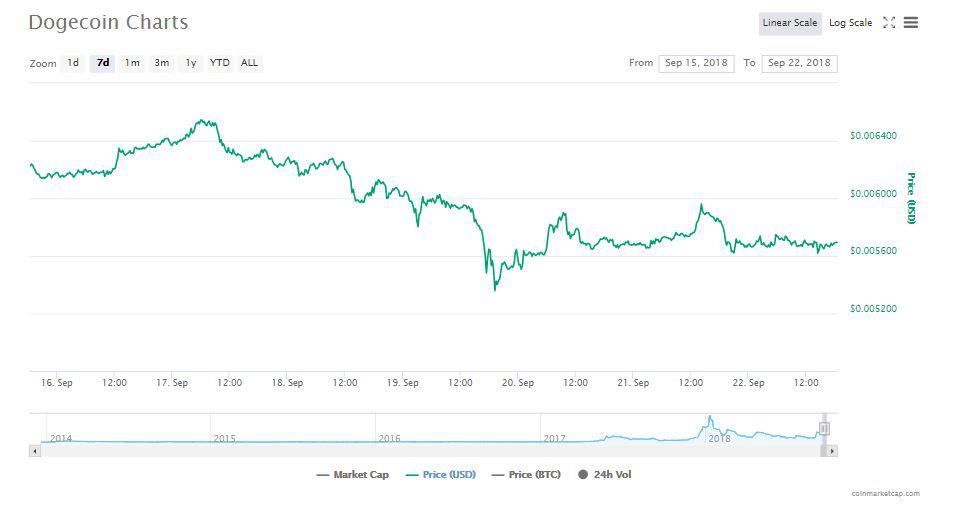 Just two weeks back Dogecoin had entered into the top 20 cryptocurrency club by going past the market capitalization of Zcash, which held a cap of $620 million to Dogecoin’s $670 million.

Recently, the cryptocurrency was in the news again when Dogecoin’s creator, Jackson Palmer had an interaction with Elon Musk. The CEO of Tesla had reached out to Palmer to stop the menace of spam bots on Twitter posts. Musk had tweeted:

“@ummjackson if you can help get rid of the annoying scam spammers, that would be much appreciated.”

The cryptocurrency’s earlier spike was attributed to the coin’s addition to Poloniex, a cryptocurrency exchange. Another important factor, as quoted by analysts, also point to the release of Dogethereum as a cause for the increase.

The coin is famous for being a meme coin, as seen by its official logo. It is based on the ‘Doge’ meme, which is characterized by Shiba Inu dogs speaking in broken English. This was the attitude exhibited by members of the Dogecoin community after the recent hike in the price of the cryptocurrency, as seen by various memes commemorating the event.

The cryptocurrency has an ardent fan following in the tech space with ‘deadrail’, a Reddit user saying:

The post Dogecoin [DOGE] drops by 8% to become the biggest loser among top 50 cryptocurrencies appeared first on AMBCrypto.