On 10th September, Bittrex, the cryptocurrency exchange platform had recently announced the formation of Bittrex International INC. The international platform is directly affiliated to Bittrex INC, with an agenda to focus on businesses operating outside the United States of America. They will also create and manage a global collection of innovative blockchain technology. 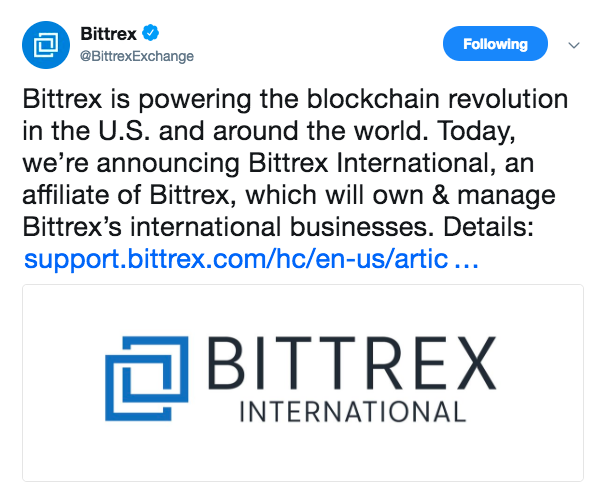 In addition, Bittrex International has established Bittrex Malta Ltd. They are currently operating in Malta and claim to provide a secure, reliable and advanced digital asset platform with the help of Bittrex’s trading technology. Bittrex Malta aims at building trust and a larger global footprint by listing innovative coins and tokens on their platform.

They also intend to become a virtual financial asset exchange which is regulated under the Maltese laws. To increase the adoption of Bittrex’s technology around the world, Bittrex International network of partner exchanges are allowed to avail every digital asset listed on Bittrex Malta. The exchange platform will also ensure that they will operate within the regulatory framework established by the European Union and Maltese Government.

Bill Shihara, CEO of Bittrex had stated that his team will use a secure, reliable and innovative platform technology to power the blockchain revolution. He further stated;

“Through our U.S-based trading platform, and our growing network of partner exchanges around the world, Bittrex is making blockchain technology and digital asset trading more accessible to the global community. Bittrex International and its subsidiaries will further advance our work to increase adoption of this revolutionary technology by streamlining the process of identifying and listing some of the world’s most innovative blockchain projects.”

According to a recent post, Bittrex bought a 10% stake in Palladium, a Malta-based blockchain company. Palladium had recently launched the world’s first fully regulated Initial Convertible Coin Offering [ICCO] which will give investors the right to convert their tokens into shares of Palladium three years after the issue date. Bittrex’s latest investment into Palladium has made it a major player in the Maltese blockchain company.

“Who does & who will be doing #KYC? Do you #verify the #identity? Who stores this information @BittrexExchange”

“My favorite exchange.. USD trading and withdrawals is what this space requires for global adoption. Plus thank you for the smooth USD withdrawal. Took 2 days for funds to be credited in my overseas bank account”