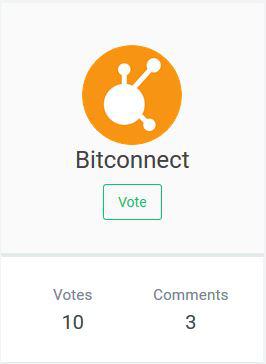 BitConnect voted to be listed on the exchange platform | Source: Aiodex

BitConnect was accused of being a Ponzi scheme by the majority of the community after its inception. This included Vitalik Buterin, the co-Founder of Ethereum. BitConnect exchange platform pulled off its Ponzi scheme by promising unrealistic returns.

The platform had guaranteed a return of upt0 120% per year with the help of their PoS minting. The platform said that the users were required to hold their coins in their BitConnect-QT wallet to earn profits. This was a part of their BitConnect Coin and Staking scheme.

Moreover, their multi-level referral feature became the famous Pyramid Ponzi scheme in the market. This led to a majority of the YouTubers and social media users hop onto the bandwagon, asking people to sign-up on the platform by using their referral code.

The platform claimed that the returns were generated with the help of their Bitcoin trading bot and volatility trading software which guaranteed a return of around 1% per day.

BitConnect went off business after it received a cease and desist order from the Texas State Securities Board. Prior to this notice, United Kingdom’s Government had sent a notice to the exchange platform asking to prove their authenticity and had given a time frame of about 2 months. This was followed by the exchange platform shutting down their business.

After the news of Ponzi scheme erupted in the market, the coin which was ranked among the top 20 cryptocurrencies went through a free fall in the market. The coin went from trading at $463 to $5 within a few days.

The Ponzi scheme is so famous that the commenters for the NYSE Arca Bitcoin ETF stated BitConnect an example for a Ponzi scheme in the cryptocurrency market in the rejection statement released by the United States SEC.

“Its unbelievable that people are still trying to get Bitconnect listed on exchanges.”

“BCC has a strong community and its blockchain is very much alive.”

“What exactly is unbelievable about stupid people getting scammed trying to get their money back? If it gets listed, new stupider people can buy and make the formerly less stupid people whole. The literal definition of pyramid scheme.”

The token is going to be delisted from the last exchange platform, Trade Satoshi on 10th September.

The BitConnect Head of India, Divyesh Darjit was arrested by the immigrant officers on his way back to India from Dubai. Furthermore, the promoter Calin Powell is being detained by the FBI, according to the announcement made by him on his YouTube channel.

The post BitConnect [BCC] community votes for the token to be listed on an exchange platform appeared first on AMBCrypto.