BitcoinDark [BTCD] recently surged by 294% in the past 7 days, according to the data presented by CoinMarketCap. The coin has witnessed a surge of more than 270% in the past 24 hours and the maximum trading volume is from Poloniex, one of the leading cryptocurrency exchange platform.

However, Poloniex has halted trading services of the coin on their platform. They said:

“BTCD is currently under maintenance or experiencing wallet issues. Deposits and withdrawals will remain disabled as we work to find, test and audit solution. Thank you for your patience in the meantime.” 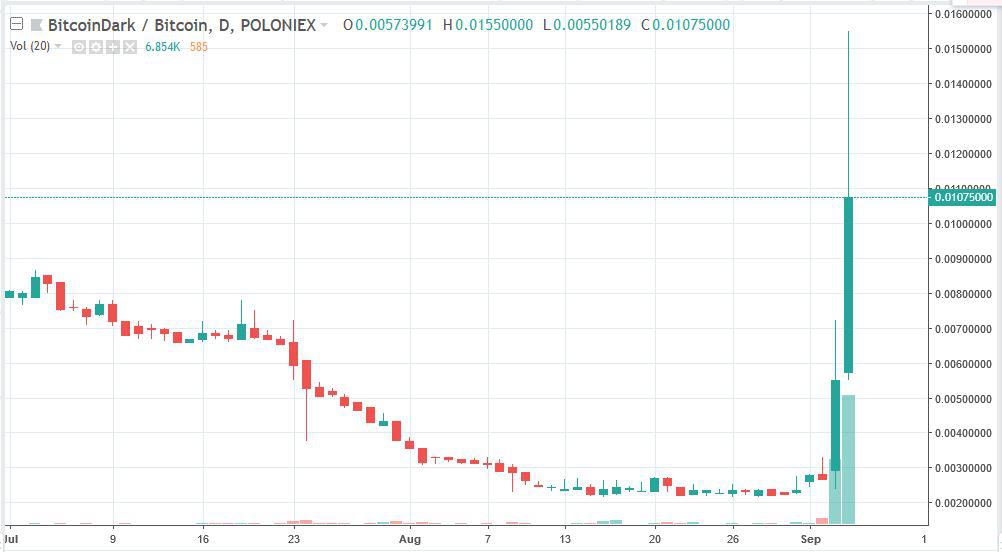 The surge in the value of BitcoinDark since the since 3rd September | Source: Trading View

This has led to the speculations of scam and pump and dump. The BitcoinDark portal has a striking resemblance to BitConnect’s portal, one of the biggest scam in the cryptocurrency market. This project was initiated with the aim to surpass Bitcoin [BTC] in 2014.

The platform claimed to provide multiple investment opportunity to its investors. However, according to the announcement made by the BitcoinDark in the month of August 2018, the whole team has shifted to another project, Komodo, and are currently working on it.

“Remember that #BTCD was swapped for Komodo. And the whole team moved on to the development of #Komodo, So, you can follow all the news on Komodo’s official Twitter.”

According to the announcement made in the month of September 2017, the team stated that the previous blueprint for the privacy has been updated and Komodo is the 2.0 version of BitcoinDark.

Komodo is using the Zcash zero-knowledge proof and will be implementing the Delayed Proof of Work [dPoW]. During this announcement, the platform had stated that investors/owners of the coin will have a period of 1 year to swap their BTCD to KMD.

“Never go full fake Bitcoin… Confirmation of complete scam if this gets delisted within the next 3 months.”

“#Bitcoindark is a pump and dump look at what #AUcoin was just at the other day and have a look at what it is being bought and sold right now.”

The spike in the value of BitcoinDark does not seem to have an adverse impact on the Komodo. At the time of writing, the coin was trading at $1.58 with a market cap of $173.47 million. The coin has seen a significant rise of more than $19% in the past 24 hours.

The post BitcoinDark [BTCD] spikes by 394% in 7 days: A classic pump and dump? appeared first on AMBCrypto.