Antoine Le Calvez, the creator of p2sh.info and forks.network, recently revealed on Twitter the results of his analysis of spending patterns in the early blocks of Bitcoin [BTC]. The analysis revealed that there was a miner who was active on the Bitcoin network who mined from December 2009 onwards.

Out of the BTC that he mined, around 30,000 were sent to exchange platforms from December 2016 to January 2018. At current prices, this is worth around $199.8 million. However, in December of last year when the price of Bitcoin was at its all-time high, the stash would have been worth around $600 million. 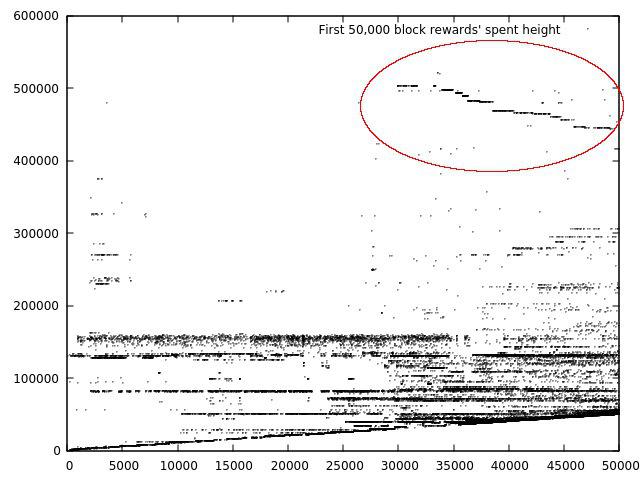 Calvez discovered this data by plotting the spent Bitcoins from each block, starting from January 2009, which was when the first Bitcoin block was mined. It extends until the month of April in 2010. The height of the graph represents the block from which the Bitcoin was spent.

The movement was also suspicious, as it seemed as though the miner did not spend the coins from the younger blocks. This could have been done to not reveal how long they had been mining the coin, said Calvez.

He pegged the beginning of the miner’s profits from December 2009 onwards, saying that “it could have been earlier”. The miner continued mining for 7 months, which could have netted him profits of over 30,000 BTC. This is due to the block rewards being high in the initial stages of the Bitcoin network. Moreover, the mining difficulty would have been very low, owing to the network being in its nascent stages.

Calvez also mentioned that he did not think it was Satoshi who was moving the coins. This is also due to the fact that Satoshi’s collection of Bitcoin has largely been left untouched, as evidenced by no funds moving out of his wallet.

The activity still remains suspicious and puts into perspective the amount of Bitcoin that lie in early adopter’s pockets. Due to the cheap price of Bitcoin during its initial stages, these adopters can effectively manipulate the market and are popularly known as whales. Popular examples include the Winklevoss Twins, Barry Silbert, Tim Draper, and Satoshi Nakamoto himself.