Recently, cryptocurrency investors began to notice a sudden surge of volume in Bithumb, a Korean cryptocurrency exchange platform. The upsurge is reported to have taken place on a day to day basis over the past week. Alex Krüger, a cryptocurrency trader and an analyst took to Twitter to inform the cryptocurrency community of the suspicious activity and accused Bithumb of dealing in wash trading. His tweet stated:

“There is currently USD 250 millions of fake volume traded at Korean crypto exchange Bithumb, every day at 11 AM Korean Time, since the 25th of August. My Tweet storm covers the math behind it in simple terms. Wash trading illustrated.”

According to his chain of tweets, the Korean exchange showed extremely high volume candles at precisely 11:00 AM as per Korean Standard Time. The analyst further stated that the airdrops that Bithumb was carrying at the previously mentioned time slot are what caused the $250 million surges in fake volume trading starting from 25th August. His tweet further stated:

Krüger went on to explain that certain traders make about $9 million on Bithumb by trading about 31K Bitcoin at exactly 11 A.M every day and this incident has been occurring since the 25th of August. This would mean that 252 billion Korean Won has been traded in Bitcoin and a remainder of 26 billion Korean Won is traded using other coins on the platform in the past week. 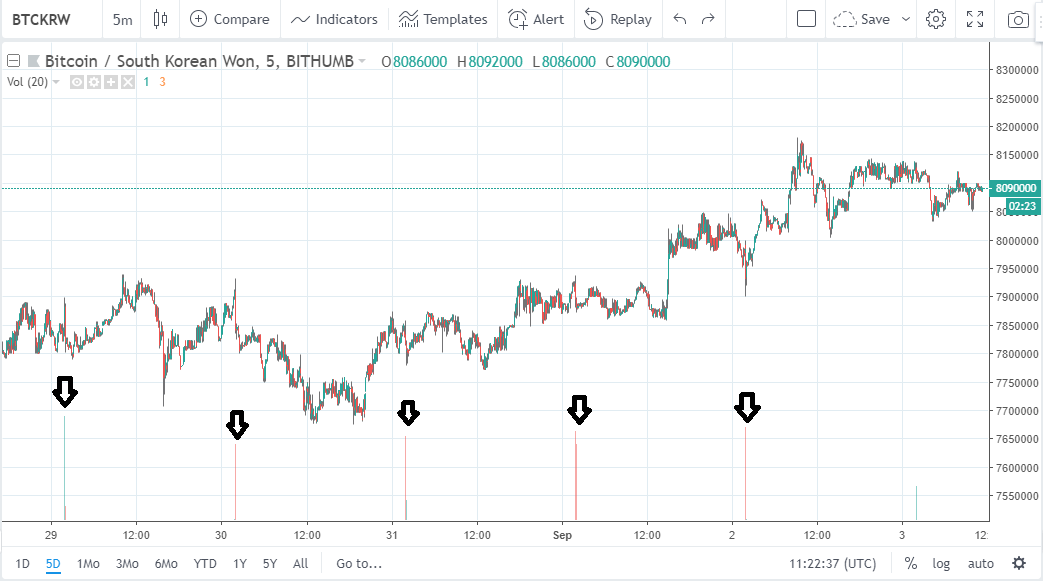 The spikes in trading volume at 2:00 A.M UTC every day | Source: TradingView

Krüger further added that in order for traders to claim the entire amount [$9000, 000] rebate [a fractional refund made to someone who has paid extra currency for tax, rent, or any other utility], an individual trader or a handful of traders will have about 279 billion in Korean Won [about $250 million] of volume in one day.

A Twitter user named JSterling8 in response to the analysis by Krüger commented:

“Interesting article. You can also programmatically detect fake volume. Watch the order book and trade execution feed. When you see executions that had no corresponding book entry, or executions consistently on the same tick that the order book entry comes through, it’s prob fake.”

“Always on point and facts! Thanks for sharing.”