Bitcoin [BTC] and XRP seem to be two sides of the same coin, as the latter observed an exponential growth fuelled by rising trade volumes over the past week. There seems to be more in the waiting for both the coins, as the charts indicate. 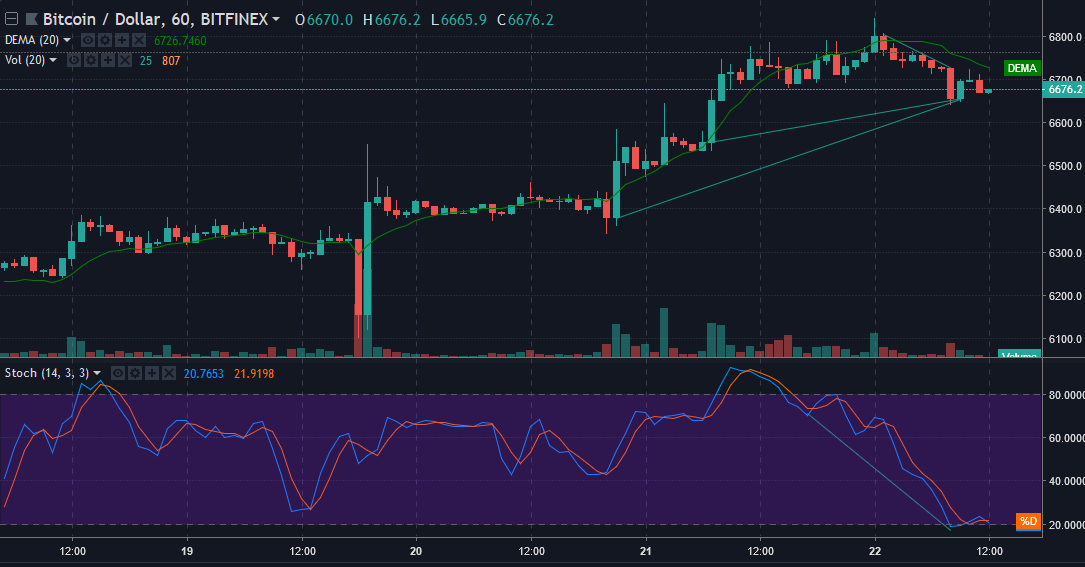 The DEMA is currently at $6737, providing resistance at the level for the next run. The downtrend from $6800 to $6720 is also providing a resistance level, as the price bounced off it a few times.

A triangle is forming between the $6650 and $6550 trend lines. This implies that a break out might occur soon.

The Stochastic dipped into oversold territory, followed by a brief rally up. It is flashing a bear setup signal, which is indicative of a spike in price preceding a drop. 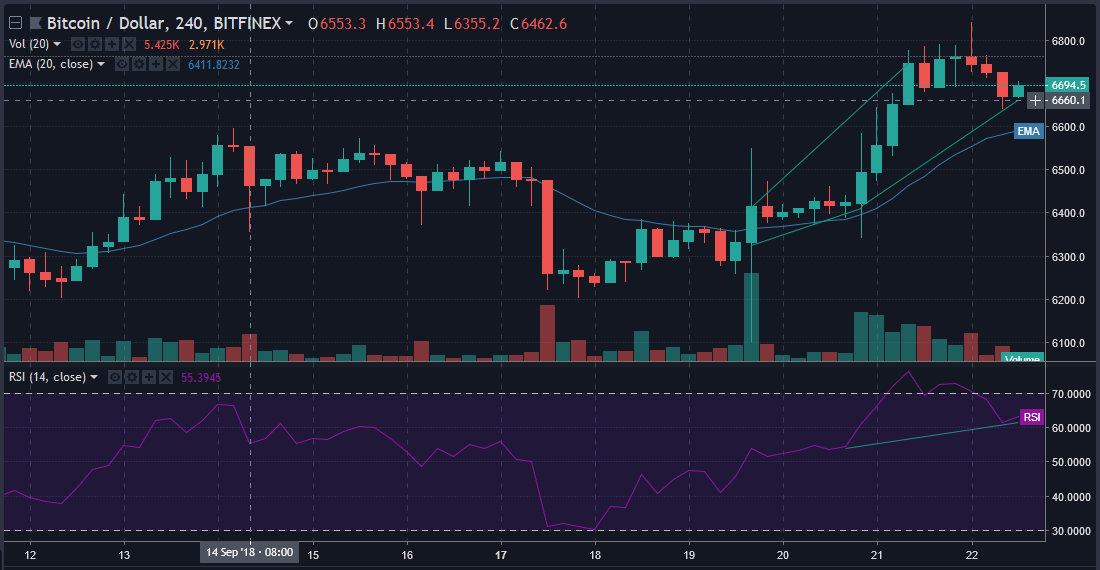 The Relative Strength Indicator is dipping back under overbought territory after skirting the limit during uptrend from $6500 to $6750. The momentum of the price is also increasing as seen by the beginning of the upwards movement in RSI.

The Exponential Moving Average is at $6591 and will provide a floor if Bitcoin breaks $6650. The channel between trend lines indicates that a breakout might occur soon. 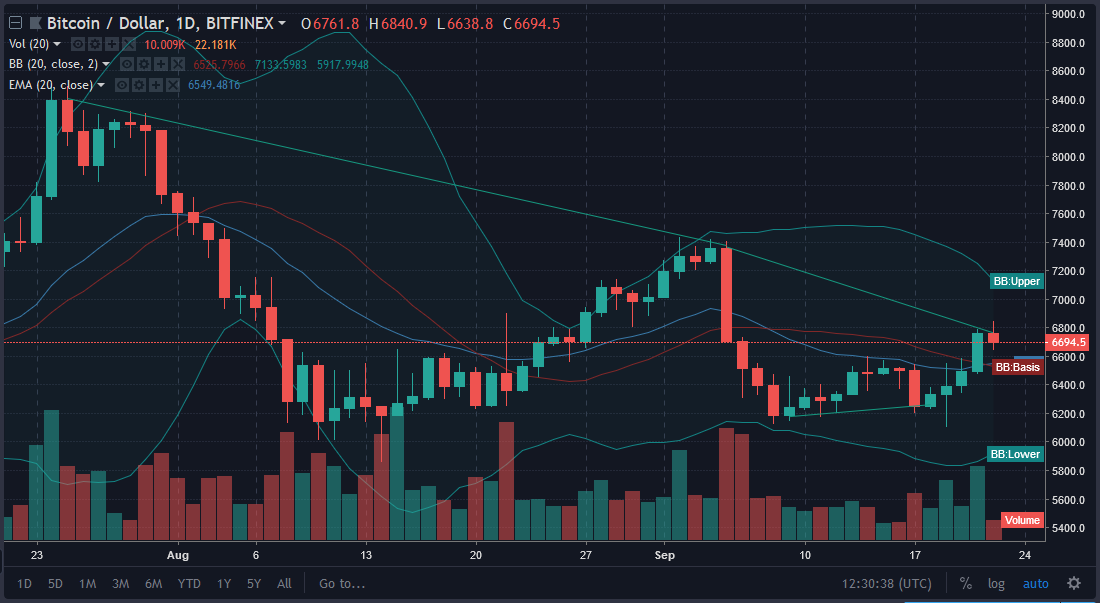 The price is continuing the downtrend from August. This marks the importance of the $7350 mark for the price to break through, as it represents a change in the long-term trend.

Bollinger Bands are comparatively narrow and seem to provide a place for an upward movement. The uptrend at $6170 provides a strong floor for the price to continue positive movement. 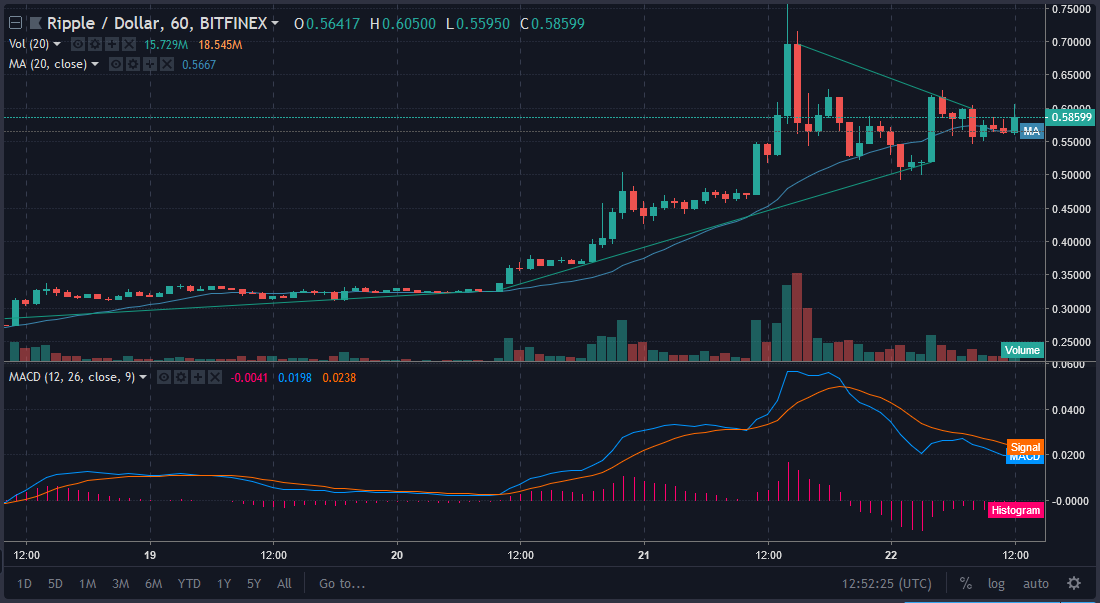 The histogram for the moving average convergence divergence is below zero and is leading of a downwards movement. If this occurs, a bullish crossover might be observed which signals a potential move upwards.

The moving average is at $0.56 and provides a support for the next push upwards. 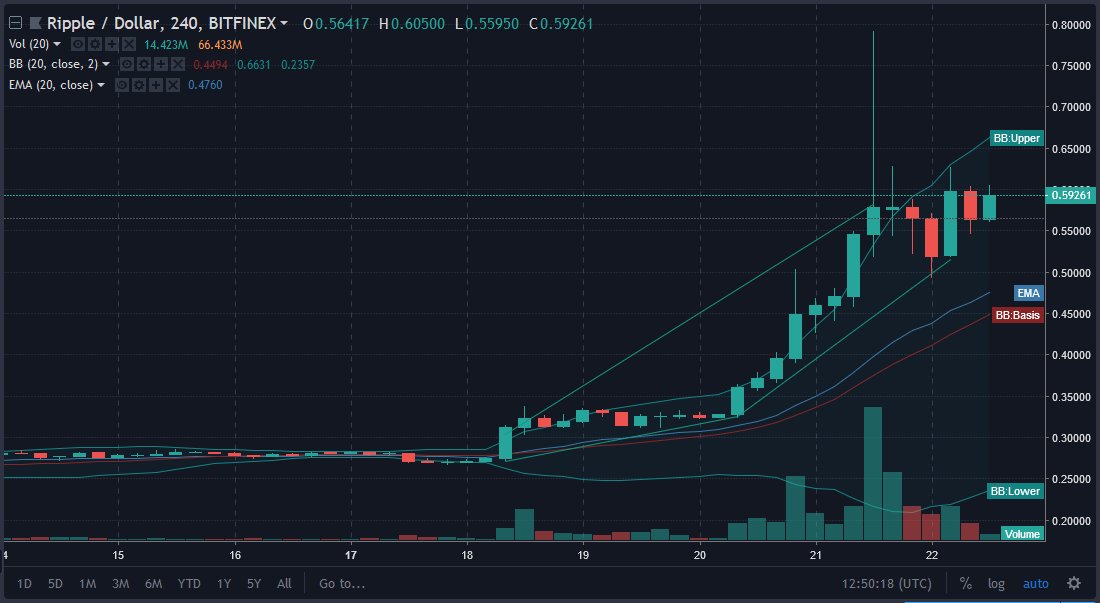 The price is also extremely volatile, evidenced by the exponential explosion on the indicator.

The 20 Exponential Moving Average [EMA] is at $0.36 and has not caught up with the price movement yet. As the coin is currently trading at $0.58, this signifies lag.

The RSI is also extremely overbought at 83, although external factors may be responsible for this. If the price can translate this momentum into market movement, a strong uptrend may be observed.

Bitcoin is in the same place it was yesterday, although indicators imply that the bears are waiting. Price movement is due, as seen by the breakout possibilities. Important resistances are at $6700 and $6500.

XRP’s next bull run might be driven by its volume, which has been observing more than 10x increase over the past few days. If it manages to translate the overbought signal into an uptrend, expect to see the $0.60, $0.67 and $0.73 levels to be tested.