Bitcoin [BTC] recently broke past the $7000 mark after falling in the bear’s grip last month due to the postponement of Cboe VanEck ETF by the SEC. This was days after the forceful liquidation of the shorts on BitMEX.

BitMEX, one of the leading Bitcoin Mercantile exchange platform, is believed to be the catalyst for the coin to break past the $6500 mark. The DDoS attack which led to the liquidation of shorts of several traders took place on 22nd August. This coincided with Bitcoin reaching up to $6700 from $6400. This led to the whole cryptocurrency community claiming that the cryptocurrency exchange is involved in manipulation.

However, on 2nd September, the Bitcoin Shorts skyrocketed from 22050 to 33276 within 4 hours on Bitfinex. At press time, the BTC shorts were trading at around 33000. 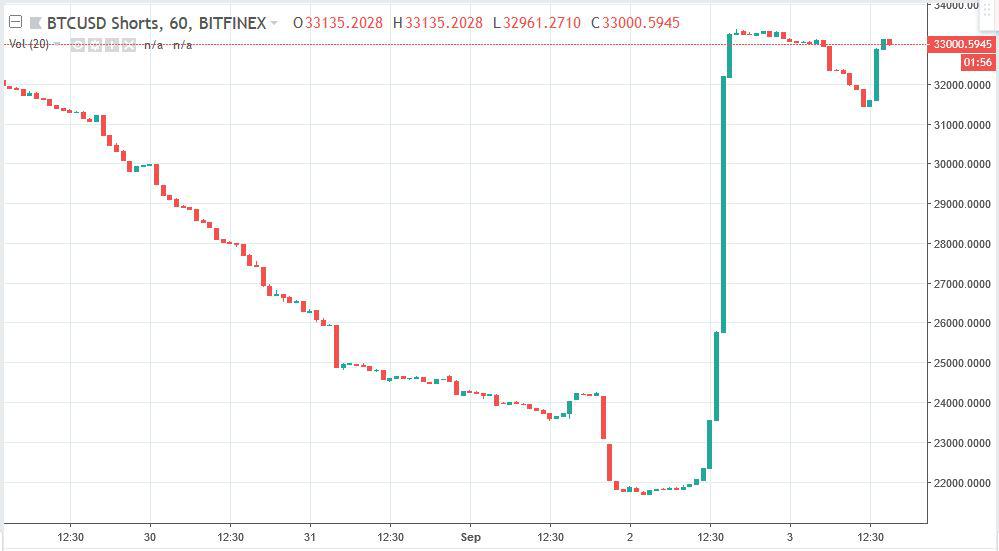 The recent hike in the shorts could be because of the news of $1 billion worth of Bitcoin [BTC] which is connected to Silk Road accounts. These Bitcoins are being transferred to Binance, Bitfinex and BitMEX. The short-sellers are probably anticipating for the coin to be sold in the market within the next few days.

“Never seen such anger over bullish posts. Love it. Casual 12k bitcoin added to margin shorts over the last 24 hours. All at or under 7.3k.”

“This has to be the moment for bulls to show the bear trend over. To 7800 or else i think we see another 5800 or even lower soon.”

“anger and negativity dont belong in traders toolbox. Eventhough i bearish still i dont get angry bout your bullish posts. I find them refreshing and also nice look for alternative perspectives”

“this usual. you are overhauling things. shorts will win. you will want help in near future.”

According to CoinMarketCap, at press time, Bitcoin [BTC] was trading at $7279 with a market cap of more than $124 billion. The coin has a dominance of 53.1% of the whole cryptocurrency market and has seen a significant rise of more than 7% in the past 7 days.

The post Bitcoin [BTC] market to make it or break it at $7300? Bitcoin Shorts skyrockets on Bitfinex appeared first on AMBCrypto.