In a recent post, Sam Doctor, Quantitative Strategist at Fundstrat took it to Twitter where he stated that the Bitcoin networks hashrate had witnessed an increase from the month of May. According to the report the Bitcoin hashrate has almost doubled from 28 EH/s [quintillion hashes per second] to 57 EH/s.

Bitcoin [BTC] networks hashrate refers to the speed of mining operations. A mining machine [ASICS devices] is required for Bitcoin mining, It is designed to solve complex computations to find blocks. The machine is required to make thousands of guesses per second in order to solve the mathematical puzzle. 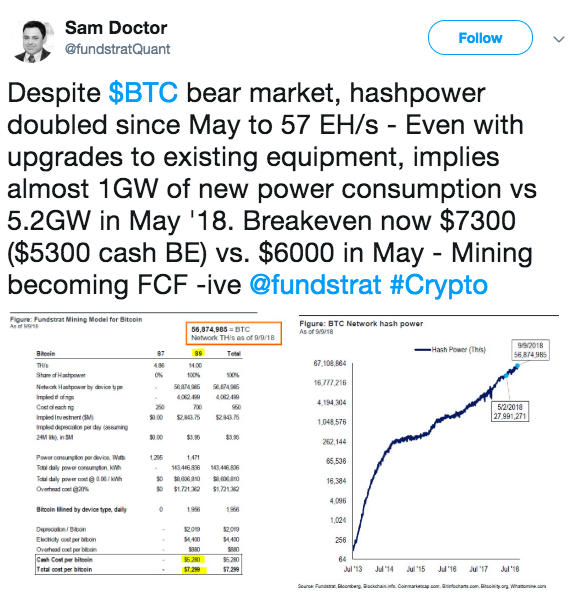 When more people are mining a certain cryptocurrency it results in increasing the hashrate of the network thus making it difficult to mine that particular cryptocurrency. As a result of the increased harshrate, the breakeven cost of mining one BTC is now $7,300 compared to $6,000 in May of this year.

The difficulty level in Bitcoin mining increases when the hashrate in the network increases, and this, in turn, would lead to the miners earning a certain amount of BTC and a portion of the transaction fees. According to Sam, the recent increase in Bitcoin mining hashrate can result in increasing the Bitcoin miner’s profitability. This could be the result of low power consumption required for mining. Lesser the electricity cost more is the profit earned by the miner.

In a recent post, a study was published which stated that the vast amounts of power required to mine BTC can be cheaper than mining for gold. The study clearly proved that out of the two stores of value, Bitcoin was far cheaper to mine than compared to gold.

“Price can go below mining cost. At which point miners will start buying instead of mining. The oscillation continues”