On 1st September, a group of Bitcoin [BTC] enthusiasts came together and implemented a fully functional POS lightning network for a bar in Berlin called ROOM77. The customers routed their Bitcoins through the lightning network to pay for their beers. The news spread quickly after a Redditor ‘joecoin’ posted about the event on the cryptocurrency subreddit a day after it took place.

Crypto enthusiast Rene Pickhardt, who created the network along with several others also tweeted about it on 1st September on his Twitter page. 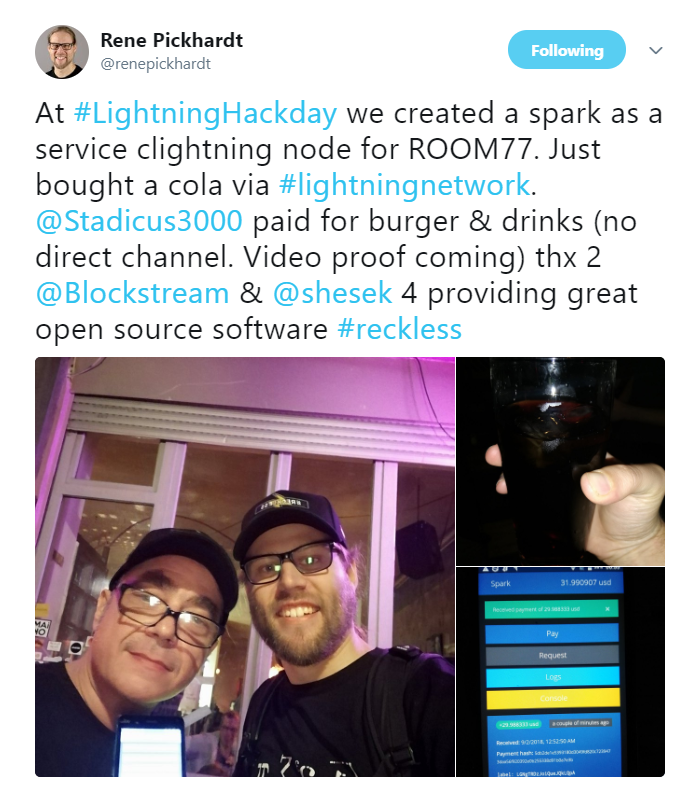 On 2nd September, Redditor joecoin posted an update on Reddit displaying his enthusiasm. It read:

“Stuff just got real. Real as in applied in a real world business in a real world usecase recklessly using real money. People opened channels to our node and paid their bill and other people did not open channels to us but their payments were successfully routed and arrived in literally microseconds as well anyway.”

Moreover, the Redditor declared the end of the much-discussed Bitcoin scaling debate, stating:

“I am herewith declaring the end of the scaling debate. This problem is solved. We can now refocus on the actual challenges like fungibility and privacy in Bitcoin.”

“This kind of innovation feels like the early days of Bitcoin all over again,”

The Twitterati was interested and curious to hear more about the event. Twitter user Brad Mills put across a question to Pickhardt:

“How can you pay with no channel?”

To this Pickhardt quickly replied stating:

“No DIRECT channel. The payment was routed over several channels.”

Another Twitter user frederikmetz asked Rene how far it all worked. The user also asked if a channel was required to be open beforehand if he/she ever went to buy a burger at ROOM77. The enthusiast replied by stating:

“ROOM77 node has some high liquidity inbound channels so if you have some good outbound channels it works like with the @Stadicus3000 payment. For my cola I used a payment channel on @DZack23 ‘s node which he borrowed from our spark as a service node.”

Moreover, the guy claimed that he has video evidence and will soon be posting an elaborate article explaining the process, with the video in it.