Recently SEC had accused 1Broker of allegedly violating the federal securities laws. The cryptocurrency platform 1Broker released an official post which stated that they would resume withdrawals for US customers as soon as the SEC approves it. Additionally, 1Broker’s CEO, Patrick Brunner made investors from America and the rest of the world purchase and sell security-based swaps with Bitcoin [BTCs]. 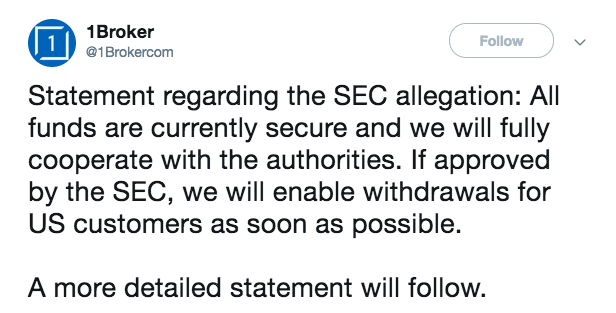 According to 1Broker’s official statement, the funds, servers, and databases were not affected and their main priority was to immediately release the funds of its customers. Furthermore, they stated that withdrawals would be allowed only after the authorities permitted them to do so.

The statement further stated, SEC claimed that the Bitcoin-based contracts offered by them were violating the US security laws but according to 1Broker, customers had to verify and ensure that the services used by them were completely legal in their country of residence.

According to 1Broker’s official Twitter handle, the fluctuation in market prices would not affect its customers and all open positions would remain closed. Furthermore, their main priority was to get the SEC’s approval to process customer withdrawal requests through an alternative domain.

“whats the problem with allowing international users to withdraw their money? The sec does not have any authority over my money”

“I am not an US citizen, why did you closed my positions?? And you based on Marshall Islands, how the US authorities effect my business???”

The post Bitcoin [BTC] based contracts sold were not illegal, 1Broker responds to SEC’s allegation appeared first on AMBCrypto.