On 6th September, one of the biggest proponents of Bitcoin Cash [BCH], Roger Ver uploaded a video shot during the Huobi Carnival in Korea wherein two members from the Bitcoin Core community talk about censorship, freedom of speech and related topics.

During the event, Ver ambushed the two with his camera team and charged a surprise interview at them. Here, Bitcoin.com’s Ver shot impromptu questions at Ruben Somsen, who is the co-moderator of r/Bitcoin Subreddit.

Subsequently, Somsen also suggested that moderation does not stand against freedom of speech as expressing on multiple forums is a valid solution to this. In his words:

“I think it’s good if we have multiple places that allow for different opinions and different views in different places because Bitcoin cash being in conflicts with that of people that are in favor of the Bitcoin Core… So if you put those communities together, that’s kind of terrible right? There’s gonna be a lot of fighting and there seem to be some fundamental disagreements that to me seems like it’s perfect you just split them up and have r/BTC, r/Bitcoin and I think that’s a great solution.”

After a heavy repeated discussion on the same subject, Ver moved on to talk about the wordings of the original Bitcoin whitepaper compiled by Satoshi Nakamoto. On being asked if the whitepaper titled ‘a peer-to-peer electronic cash system’ represents Bitcoin or Bitcoin Cash. Somsen answered by stating that the question in itself is irrelevant. Furthermore, he said that the description of the whitepaper is technically impossible [which he also mentioned is debatable], therefore, it makes sense to diverge from the literal wording of the whitepaper.

Though the discussion went for a considerable amount of time, the topics remained similar. However, it did not end well as an intense friction was observed between Ver and the Somsen. Here, Somsen requested Ver to show him the footage of the interview before posting the video. This did not stop Ver from posting it online leading Blockstream to accuse him of being unethical and crude.

Samson Mow, the Chief Strategy Officer of Blockstream took to Twitter to express his opinion. He wrote:

Here is the thread of the comments that followed: 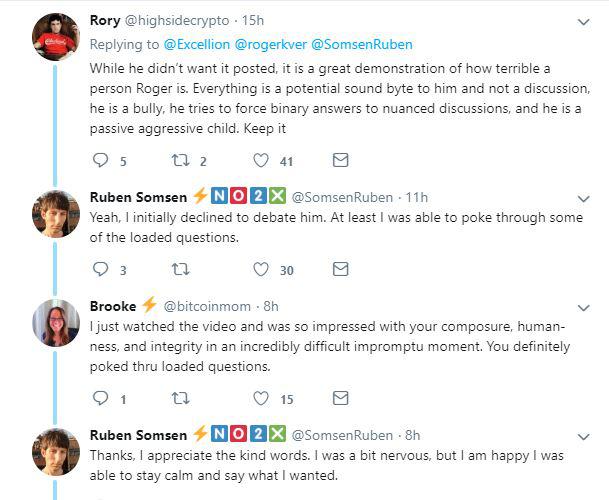