AurumCoin has recently seen a hike of 5749% on CoinMarketCap after there was inflated trading on an exchange known as Crypto Hub Online. The price on that exchange alone went up to around $1780 when prices elsewhere were in the $30 and $40 range.

The coin’s trading volume was close to $6000 for the day. This led a lot to state that this would have been a transaction that was conducted by mistake, as the coin had transactions of 0.5 BTC as the last price of purchase. This can be seen on the Crypto Hub exchange page.

As seen on CoinMarketCap, 100% of the trading volume of the coin came from the same exchange, which further reinforces the theory that it was a transaction made by mistake. 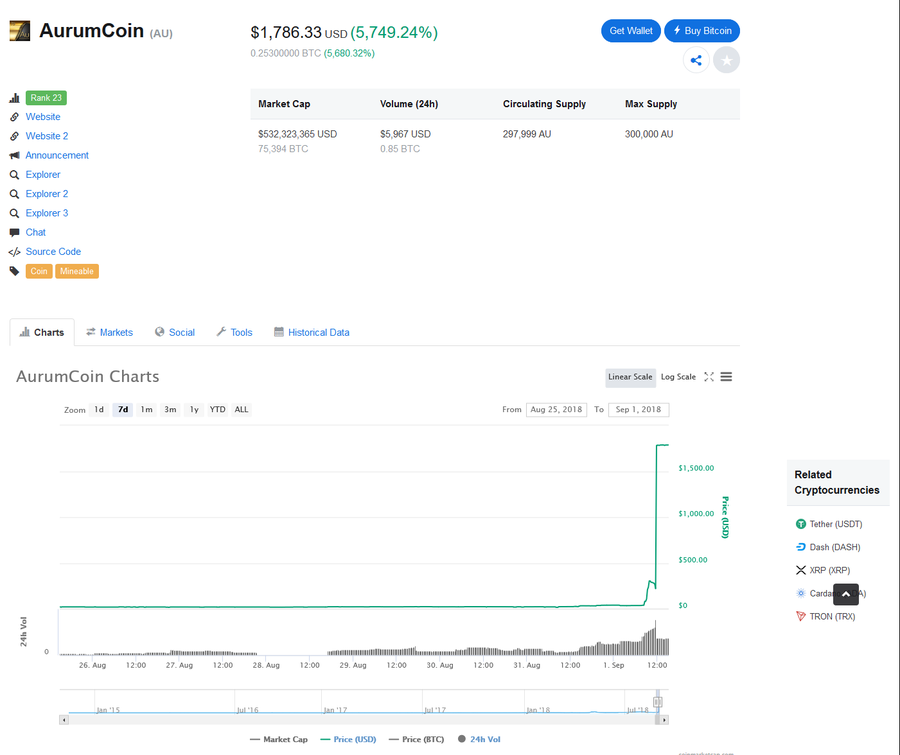 Users in the chat of the exchange spoke about the AUCoin and how it exhibited the tendencies of being a dead coin. This is due to the fact that its blocks have stopped production. User rasta said:

Similarly, user Crazy8Ball on Bitcointalk forums for the coin stated:

“it’s not real, high spread, no volume it looks like someone fat fingered and not even a full btc worth, it’s more of a deadcoin than anything lol.”

Fat-fingering a transaction is an expression used to denote people who sent their funds to the wrong address or conducted any similar mistake that caused the loss of their funds.

“Infact i cant even sell this without crashing the price on cryptopia which is an even more liquid exc. and not even 0.2 worth of Aurumcoin on cryptobridge, it’s not real besides, the creator/developer abandoned this coin a year ago”

Moreover, the wallets have stopped syncing for the coin, as the production of blocks has been stopped. This effectively makes the coin dead, as mining is not possible to bring newer coins into circulation. The situation of the coin was summed up by user fapnnap on BitcoinTalk forums, who stated:

“In any case you can’t mine, you can’t transfer, you can’t sync and a large portion of the supply has been stolen for this coin, this won’t end well, but it’s both funny and sad…oh well.”

This even closes opportunities for individuals to arbitrage between Cryptopia and Crypto Hub, as it is technically not possible for the coins to move. It is currently at #23 on CoinMarketCap with a market cap of $532 million. By position, it is between OmiseGO and Lisk.

The post AurumCoin [AU] rises from the dead with a 5749% hike appeared first on AMBCrypto.