Recently, there appeared an allegation regarding the trading volume of OKEx, a world-leading digital asset exchange. However, the allegation itself is invalid due to the difficulty in collecting accurate trading volume data, as a person or even as media outlets let alone exchanges like OKEx with futures trading and API transaction.

What’s more is an important fact that needs to be mentioned. It has been reported that OKEx has launched a program named Happy Friday, a bonus distribution campaign that will give away 50% of its trading fee to OKB [the OKEx platform token] holders weekly. The program has distributed approximately $5 million last week.

If OKEx has wash traded grossly to reach the volume that is currently displayed on CoinMarketCap, while the weekly bonus has remained at $5 million, the exchange will need to pay most of the bonus to users with its own money. Why then would OKEx create fake volume? That does not make sense to us at all.

The Happy Friday campaign mentioned above is a program launched by OKEx to distribute 50% of the weekly transaction fee as BTC bonus every Friday to users holding OKB. The amount is based on the percentage of OKB the user holds. Since its launch, the Happy Friday campaign became popular among OKEx users worldwide and the mega bonus pool had at one time reached up to 2,000 BTC.

OKEx, as one of the top crypto exchanges by volume, in its 24H trading volume reached $872 million on CoinMarketCap [14th, September] and $5.07 billion on AICoin [14th September], two of the most popular websites about crypto information in China. The former lists only token-trading while AICoin records the total volume including futures trading. 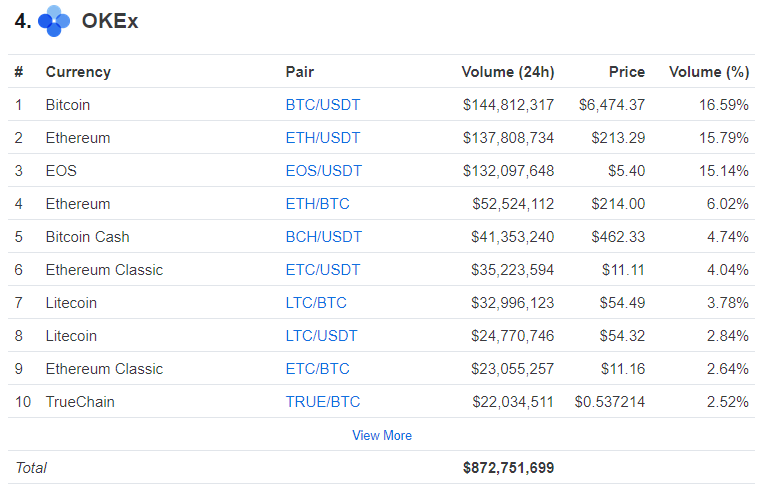 Taking the data on CoinMarketCap as the basic volume, and 0.02% [the lowest rate] as standard [which is hardly possible], the daily trading fee is $174,550, while the weekly bonus pool amount would be $610,925 [of only token-trading], which will all be distributed to OKB holders.

According to the data calculated above, users can get over 1,200 BTC each week from the OKEx Happy Friday campaign. At the same time, eligibility is easy to maintain as you just need to hold no less than 100 OKB to enjoy a mega bonus.

As to OKB, it is a global utility token issued by OK Blockchain Foundation to connect prospective digital asset projects to OKEx users as well as professional investors, creating an OKEx ecosystem that helps to advance the development of blockchain technology and the digital asset industry.

Different from tokens of other platforms, OKB has a great roadmap including but not limited to the application of programs such as Happy Friday, Global Partner, Prime Investor, OK Partner Exchange etc., as well as the world’s first index product OK06ETT.

The total available supply of OKB is 1 billion, some of which will be locked up with those programs, meanwhile, the value of OKB will be added as well. 60% of the circulation amount will be given to OKEx users for community building through marketing campaigns, which enables OKB holders to enjoy various privileges and increasing the profit for the long term.

*The current price of OKB is $1.23, which is near its historic low point and therefore worth the investment.