ICOs saw a boom in the market in the year 2017 and the beginning of this year. The surge drew a lot of attention from major market players including the mainstream media. The rise of the ICOs was one of the reasons for the glorious days of the Ethereum [ETH] platform.

Ethereum, the second biggest cryptocurrency in the market at present, became the smart contract which led to the rise of several projects. This includes EOS and Tron [TRX] which have now launched their own MainNet with the aim of surpassing Ethereum.

However, along with the advantage of being the first mover and preferred smart contract platform by the developers, it has its own disadvantages. The bear’s grip which has taken a toll on the whole market has had an adverse effect on Ethereum, especially.

Ethereum [ETH] has seen a constant drop this year, with the price looming below the $200 mark. The dip in ETH’s value turned out to be the most shocking outcome in the cryptocurrency space. Reports have emerged that the price taking the downward slope was because of the ICOs.

Some projects which have raised millions of tokens in the market through Initial Coin Offerings have started to shill in the market, according to reports. The main reason is believed to be either the effect of the bearish market or the failure of their projects.

Moreover, it has been pointed out that almost $30 million worth of Ethereum was sold during the past few days in the market, by Kevin Rooke, a Twitterati. He tweeted: 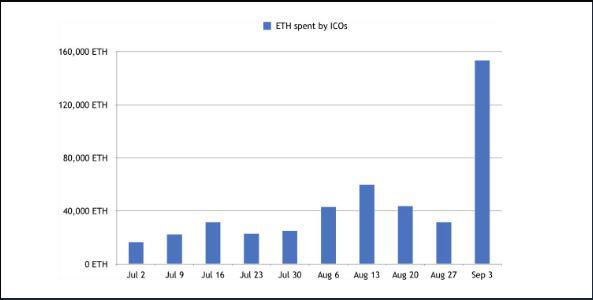 ETH spent by ICOs over the past few months | Source: Twitter

This could have resulted in Ethereum plunging below the $200 mark and the reason it was amongst one of the coins which were affected the most in this bearish market.

According to CoinMarketCap, at press time, Ethereum [ETH] was trading at $194 with a market cap of $19.86 billion. The coin has seen a significant dip of more than 32% in the past 7 days.

“Of course they will sell. What will they do HODLING? They have to buy their Lambo’s, Islands and plan retirement packages..”

“Talking about selling your crypto low… No wonder! It’s not their own invested money in the first place..”

In addition, recently over $5.5 million was transferred to Bitfinex wallet from one of the genesis blocks. This was around 93,750 ETH and the transfer did not show any significant impact on the price of Ethereum at the time of transfer.

The post $30 million worth Ethereum [ETH] sold by ICOs in the last week appeared first on AMBCrypto.