Recently, a Reddit user, Sick Silk noticed that there was a movement of over $1 billion Bitcoin [BTC] which was eventually sent to Bitfinex, Binance, and BitMEX in portions. According to the Redditor, there were three possible owners of the wallet.

The first probability was that the account could be linked to Silk Road and the second was that it could be one of the Mt. Gox wallets. The third was that the Bitcoin [BTC]s belong to an early adopter. The Redditor stated that the funds were moved before Mt. Gox filed for a bankruptcy and that dates of which the Bitcoins were moved are similar to the dates Mark Karpeles found lost Bitcoins.

Tuur Demeester, a Twitterati, posted a picture of the Reddit users statement. Succeeding which, he asked Wiz Security [WizSec] for their opinion. 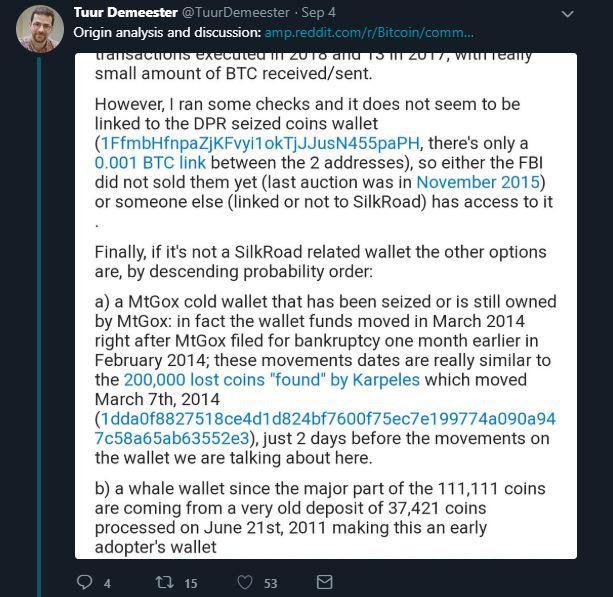 In a reply to the tweet, WizSec said that the Bitcoins belong to an old Mt.Gox whale and that movement does not have any connection to Silk Road. However, when the tweet escalated on a social media platform stating that Mt. Gox is going to be responsible for another crash. This was followed by WizSec clarifying their statement by saying that the Bitcoins do not belong to Mt. Gox but belong to someone who bought them during that timeframe.

“A recent article quotes me as predicting an imminent BTC market crash due to MtGox payouts. This is FUD with cherry-picked quotes. MtGox is nowhere near payouts and the eventual market impact can be greatly mitigated depending on the trustee’s actions.”

According to market speculators, these addresses are believed to be the reason for the crash of Bitcoin [BTC] and other cryptocurrencies in the market in the past few weeks.

Moreover, Mt. Gox is held responsible for the biggest crash of Bitcoin in the market so far. This includes the December 2017 crash, right after Bitcoin reached its all-time high and the crash in the month of March 2018.

This resulted in Mark Kapeles, the CEO of Mt. Gox declaring bankruptcy at the time of the hack. This declaration was followed by an announcement by Mark Karpeles, saying that he came across cold wallets which holds a huge number of Bitcoin. These Bitcoins are now a part of the civil rehabilitation filing and all the Bitcoins will be paid to the creditors.