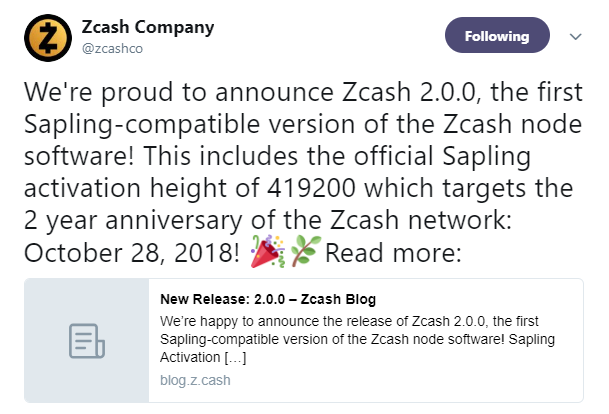 With regards to the MainNet release, the Zcash team has stated that Zcash 2.0.0 is consensus-compatible with the Sapling network upgrade. The team has consequently urged all users and miners to upgrade as soon as possible. A key point of the release is the fact that on the second anniversary of Zcash’s launch on 28th October 2018, the first block of the Sapling at height 419200 is anticipated to be mined.

The Testnet release of the Zcash node software will have Sapling activated at block 280000, an event that is presumed to occur in about a week after the release. Even though Sapling was previously activated on Testnet, because of the alterations that took effect on the consensus rules, the Zcash team has stated that the user’s nodes will automatically cut back to the Overwinter Testnet branch. This action would occur up until Sapling gets activated again at the new height.

The Zcash team has confirmed that the Sapling RPC functionality consists solely of experimental support. If the developers chose to use the functionality, they would have to specify the tags –‘experimentalfeatures’ and ‘-developersapling’ to the existing functionality on the Testnet soon after activation. Developers also have the option to use the desired features in the regtest mode as well.

A mechanism known as peer banning was brought in to lessen the burden against a set of Denial of Service [DoS] attacks from nodes. The development team argues that the action was taken during the time of Overwinter activation. This was a time when nodes that were syncing from a block height preceding the activation height experienced slow syncing and therefore the peer banning was necessary.

“Zcash 2.0.0 has announced that it will affect ASIC mining?”

“Yes!! Cheap zaddr support will do wonders for the spread of the tech.”

“Hopefully it’s not too long before some nice mobile wallets hit.”