The entire Venezuelan economic crisis was given another stroke in the fire with Justin Sun, the Co-Founder of Tron [TRX] stating that Petro, the newly pegged currency of the country should have been linked with Tron and not Ethereum [ETH].

The Co-Founder was steadfast in his mission to promote Tron which was evident from his move in tagging Nicolas Maduro, the President of Venezuela in the tweet. He had stated that if Petro needs to be put to some use, it has to be pegged to Tron and not Ethereum. 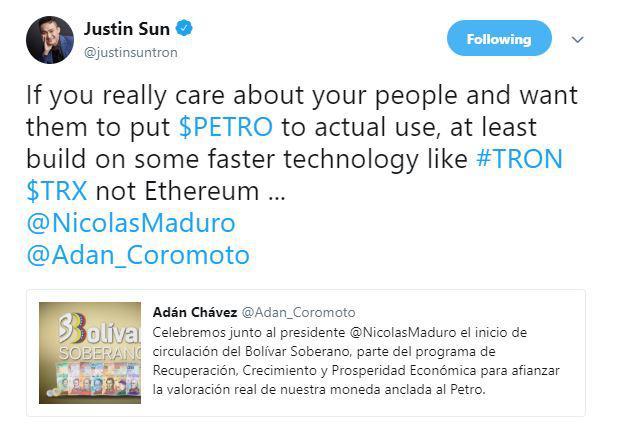 Justin Sun’s tweet came in the wake of Maduro’s tweet announcing the adoption of the ‘Sovereign Bolivar’ on the President’s Twitter account. Maduro had stated that the government will achieve stability with economic and macroeconomic balances for the good of all Venezuelans, a statement taken with a grain of salt by a lot of the populace.

Earlier, Justin had also said that Tron’s global team is bigger and more conducive to growth, mentioning the recently held global meet up in San Fransisco. The Co-Founder has given comments that stated that in the future, Tron will be 200 times faster than the Ethereum network aiming to handle over 100 million transactions a day.

Petro has been garnering a lot of attention over the past few weeks with its introduction into the Venezuelan financial stream. Petro came into the picture for the first time in December 2017 when the Venezuelan government released its whitepaper on it. To build the value of the cryptocurrency, the government had allocated 5 billion barrels of oil to it.

This move was intended to transfer the trust that people had in oil to the upcoming cryptocurrency. Sources have said that each Petro coin will be backed by the price of a barrel of oil, taking the country back to its oil-dominated economic environment. The value assigned by the government right now is $60 to each crypto coin, just above the currently assigned value of $42 for a barrel of oil.

The sheer relevance of the situation in Venezuela has projected a clear divide amongst the cryptocurrency crowd. This was present for everyone to see with two different sides commenting on Justin Sun’s tweet.

Spezznazz, a Twitter user and a proponent of the move commented:

“TRON and PETRO will be a GAME CHANGER for crypto!These are the potential SUCCES stories and things that really make SENSE,But please dont invite these good partner ships just on internet,CALL THEM make a plan to meet them in venezuala, or China or wherever. And sit down and talk.”

The other side of the coin saw a contrast of emotions that was made clear by Juan Pablo Sosa, another Twitter user’s comment, which read:

“Yes that’s what trx needs, to have maduro and his bullshit petro backing it up… read some news dude, if you do that you lose all your Americans holders and traders, plus you are contributing to the dead of more Venezuelan People…and now I will unfollow you for your humanity”