On 15th August, prominent digital currency exchange Coinbase announced on Twitter that Toshi, an Ethereum Wallet, and dApp browser would be rebranded as Coinbase Wallet. According to Coinbase, the rebranding effort was initiated to capitalize on products that would potentially decide the future of the decentralized web, effectively making it available to everyone. 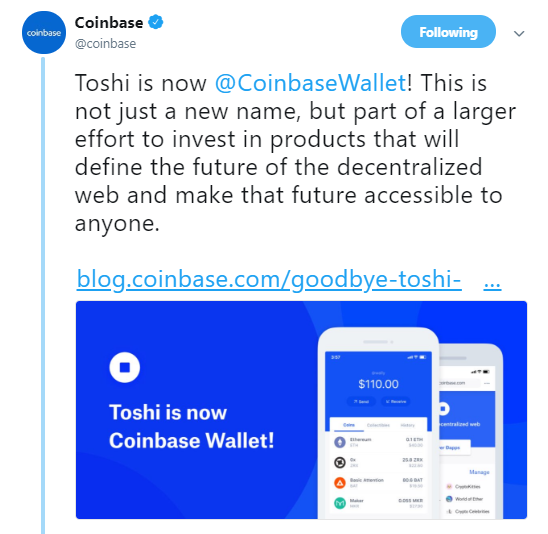 Coinbase has stated that there will come a time when the world at large will own a cryptocurrency wallet that permits them access to decentralized applications [dApps] and that very wallet would then be their entry into the financial system. Their focus is therefore set with that vision in mind.

The Toshi Wallet which was developed by the Coinbase team about a year ago allows users to interact with Web3 decentralized applications [dApps] powered by Ethereum on the devices of the users. The wallet enables users to easily and securely store, send and receive Ether and ERC2O tokens. Toshi is said to be the world’s first mobile dApp browser when it was first introduced. It is also the first wallet to launch cryptocurrency collectibles.

The Coinbase team has assured users that the wallet will secure the private keys of users by using the secure Enclave and biometric authentication technology on their devices.

What can the refurbished wallet offer users?

“Very good for mass adoption. Keep up the good work. I remember when Toshi was Token wallet.”

“This is pointless without support for BTC. You might as well make a website that doesn’t work with Chrome.”

“Too soon! Made the ultimate sacrifice. RIP Toshi, the Mega Whale!”

“ConbaseWallet! Let me do you a favor, noobs.  Use a REAL wallet solution like @SamouraiWallet and not this Mickey Mouse shit.”

The post Toshi to be rebranded as Coinbase wallet – Is it the future of decentralized web? appeared first on AMBCrypto.