On 17th August, Nano [NANO], a global cryptocurrency company announced on their official Twitter page that the coin will now be accepted by the world’s only crypto store, the Bitcoin Superstore. The Bitcoin Superstore houses almost all retail stores worldwide, including stores like Amazon, Alibaba, and John Lewis. Customers can pay for their purchases through cryptocurrencies. 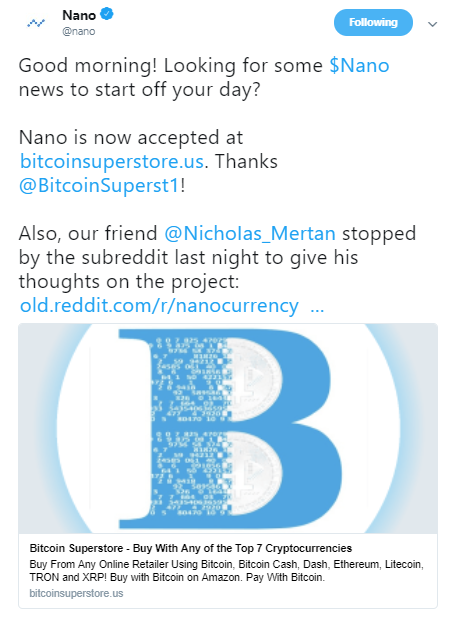 On 15th August, Nano also posted a mid-week update on their Twitter feed that said:

“Testing of v15 on the beta network has been going great. We’ve seen a drastic decrease in bandwidth due to the new Vote by Hash system. There are just a few days of testing left and we look forward to its release at the end of the week! $nano”

Earlier this month London Block Exchange [LBX], a cryptocurrency exchange announced on their official Twitter handle that they would soon be listing Nano on their platform. The partnership would mean the first Nano and British Pound [GBP] pairing.

Last month, the Nano community raised an amount of over 230 NANO from the users on the subreddit of Nano community. A user on Reddit explained the situation of the Venezuelan economy directly affecting the standard of living of the people. Initially, the user was only donated a small amount of 0.5 NANO. Later, a series of donations followed after a thread of the initial donation went viral in the subreddit of Nano. The amount accounted for a large sum when calculated in Venezuelan living standards.

Nicholas Merten, the Founder of DataDash on YouTube also a Redditor commented on the Venezuelan donation:

“When I saw what you all were doing for people in financially-torn Venezuela, it tugged my heart strings. THIS is what crypto has been missing. We’re at a time where a variety of  merging markets [Venezuela, Argentina, Turkey, etc.] are experiencing major currency crisis’s, and little to no one in crypto has taken upon the opportunity to share knowledge or some of their own crypto with citizens of these nations.”

“It’s the only way to take this mainstream and see its true potential. I wish to see many more of these charitable events in the ecosystem, and will happily donate some of my Nano to contribute! It’s a great moral thing to do, and it helps people realize that there is an alternative.”

Nano’s price hike in the past week| Source: Twitter

Other altcoins which have significantly risen in the past week are VeChain [VEN], Lisk [LSK],  and Ontology [ONT]. Reports indicate that the surge in prices of these Altcoins are a stark contrast in the bearish market, where the prices of all leading crypto coins have been displaying a downtrend for the past one week.

The post Nano now accepted at Bitcoin Superstore, sees a hike of 43% appeared first on AMBCrypto.