On 9th August, IBM Blockchain announced on Twitter the formation of TradeLens, a joint venture between IBM, a leading multinational computer manufacturing company and Maersk, an integrated transport and logistics company. 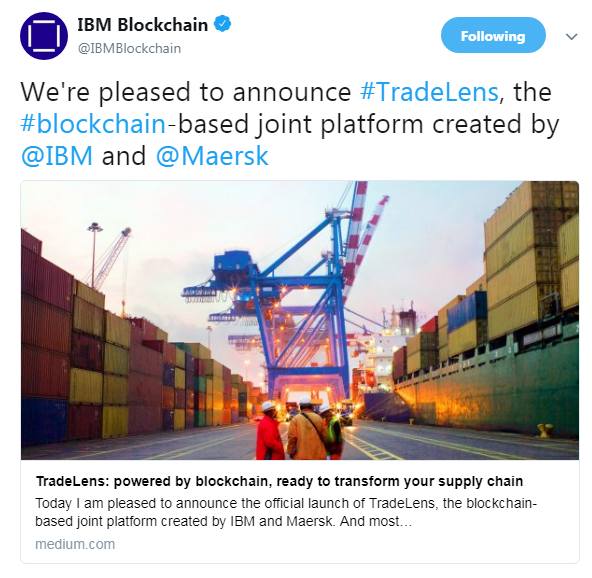 Michael White, the head of TradeLens, stated that the blockchain-based platform was launched to combat the challenges faced by individuals involved in international trade.

IBM Blockchain is a subsidiary of IBM [International Business Machines], which was created to track digital currency transactions. Its ledger is said to be both transparent and tamper-proof. Maersk Line is prominently known as one of the world’s largest container shipping company.

TradeLens, a collaboration of both these giant companies was set up to ensure that every individual concerned with the international supply chain can contribute and gain value from it. The new platform hopes to streamline and standardize the flow of information by using digital solutions. The result would be a system that is both efficient whilst creating new opportunities for those concerned.

On the TradeLens blog, White stated that the platform wishes to assist all concerned parties in the supply chain to achieve crucial access to the critical end-to-end information and data. The process is said to be secure, accurate and seamless. White further added:

“TradeLens is the real deal; a solution that puts all the essential pieces together to digitize the global supply chain through innovations like a shared ledger, smart contracts, encrypted transactions, continuous audit history and transaction endorsement.”

Through the new collaboration, IBM Blockchain and Maersk Line hope to resolve several key issues in world trade. The move is said to be the answer for the entire trading industry whilst all global industries work in being a part of it. As a result, TradeLens will be working closely with multilateral trading bodies such as the CEFACT, BiTA and OpenShipping.org.

The platform also seeks to form new ideas and innovations through the use of APIs [Application programming interface]. Using blockchain digitization and automation, the easy enabling of export and import clearance may be achieved. TradeLens affirms that transactions may become verifiable and auditable in this way.

“Hopefully this will be applying Stellar’s payment processing for faster and cheaper payments to really revolutionize the world!”

Recently, IBM Blockchain released a new coin known as the Stronghold USD that is created on the Stellar blockchain. In early July, IBM blockchain announced their technical support to Mobility Open Blockchain Initiative [MOBI], an NGO whose aim is to make the transport industry more accessible and efficient.