Along with the emergence of new tokens, the price of Bitcoin [BTC] and other cryptocurrencies have also made a lot of buzz in the industry because of the “unexpected” downward swing of crypto prices. Many speculators of the cryptocurrency market have remarked that this space is the ‘most controversial’ industry/market in the world.

Ethereum, the second biggest cryptocurrency in the market was one of the most affected coins in the market when compared to all the other cryptocurrencies. The main reason is believed to be the sale of ETH by ICOs. Some believe that Ethereum has become the graveyard for ICOs and scams. In addition, most of the traders have already started to short their ETH with a belief that it is going to be under the bearish dejected growth for some more time.

Recently, Zoe Dolan, a Lawyer and a Decentralized enthusiast, pointed out that a “whale” made a move on the genesis block. The post states that around 93,750 ETH was transferred last week. The amount rounds up to almost $5.5 million. 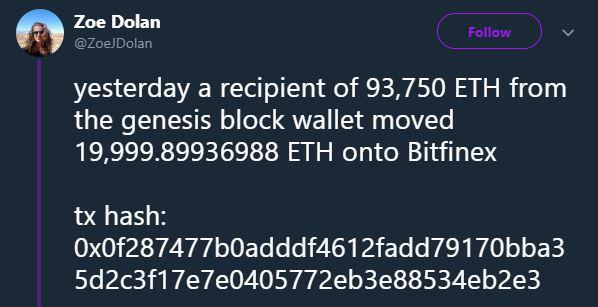 According to Etherscan, the $5.5 million worth of Ethereum has been sent to Bitfinex.

Information regarding the transactions | Source: Etherscan

However, the massive movement did not have any downside impact on the value of Ethereum on Bitfinex at that exact timeframe. ETH, however, witnessed a continuous dip through-out the day.

The timeframe [UTC] of the value of ETH during the transfer on Bitfinex according to Trading Value: 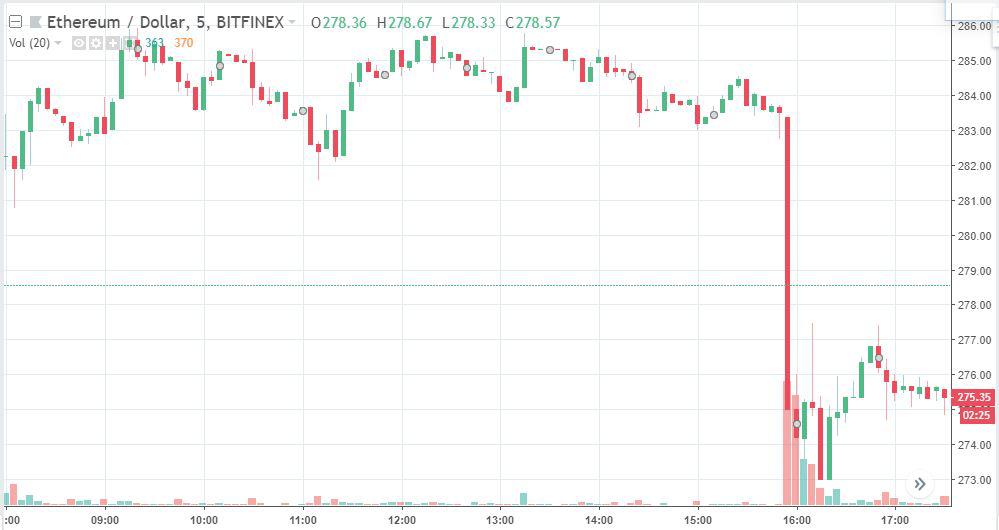 According to CoinMarketCap, the ETH trading volume on Bitfinex was close to $50 million. The amount of ETH that was transferred to Bitfinex on that day was $5.5 million. The drop at 16:00 UTC from $286 to end the day at $259 is an approximate 10% drop, which coincidently is the same amount of volume that was transferred on Bitfinex. According to Fahran Karim, a day trader who spoke to AMBCrypto, says that the markets are now volatile because of this alleged “ETH dump”. He says,

“The calculations say it all, some guy on the genesis block knows that ETH is coming to an end. Although you have no imperical proof, do the math, 5 million of a $50 million trading volume, that’s 10%. Guess what, that’s how much the price dropped on Bitfinex. This ETH dump is not going to stop”

Fahran’s “friend” Freddie Morgan, another trader had an opposing argument, he says,

“ETH is not dumped. People like Fahran who do not understand the market make immature statements looking at some dumb statistics. No one dumped nothing. Sure someone moved it but you do not know if he sold it. The 10% market corellation also does not add up. This is all just FUD. FUD in the making. Ethereum, sure will have some troubled times because of stupid, scammy ICOs but it’s not going anywhere, people”

Reportedly, several ICOs have dumped their tokens in the market since the beginning of this year. The reason is stated to be either the failure of the project or the project being a scam. The most controversial dump in the market is reported to be EOS.

EOS had allegedly transferred around 150 million ETH which is valued at around $41 billion to Bitfinex at the beginning of May 2018. They transferred another 300,00 ETH at the end of the month. Moreover, EOS had dumped most of their ETH tokens with only 100,00 ETH remaining in their address.

According to TrustNodes, since the beginning of this year, ICOs have dumped around 8.2 million ETH which is approximately valued at more than $2 billion. The biggest ICO sale is recorded at 750,000 ETH which occurred in the month of May. This led to a price drop of around $100 on the day it was sold i.e., 7th May 2018. The second highest sale is recorded at 630,000 ETH which led to a drop of around $50 on 27th March 2018.

The ICO dump has led to Ethereum crashing to its all-time low this year. The coin fell below $300 mark, which is close to the value of Ethereum in the month of September 2017.

In addition to this, ETH scams are also on the rise on all the major cryptocurrency social media platforms such as Twitter, Telegram, and Facebook. Users are lured into the scam as the scammers claim to ‘giveaway ETH’ on social media handles. The giveaway posts are visible in the comment sections of all the well-known influencers, CEOs and Founders.

The scams have become so popular that it led to influencers adding ‘not giving away ETH’ next to their name on their social media profiles. This included Vitalik Buterin, the Co-Founder of Ethereum.

The scams also drew the attention of Elon Musk, the Founder and CEO of SpaceX. He tweeted:

“I want to know who is running the Etherium scambots! Mad skillz…”

To which Vitalik said:

Vitalik has called out these scams on multiple occasions on Twitter and has requested Jack, the CEO of Twitter and the Ethereum community to look for a scalable solution in order to rid all the social media handles of the scam bots.

According to MyCrypto, over $1.48 million has been raised by scamming users over social media platform with the ‘giveaway’ posts.

The recent research conduct by Kaspersky Labs stated that Ethereum is the most common token used for phishing by scammers.

“The popularity of Ethereum with cybercriminals increases as more funds are attracted by ICOs on Ethereum platform.”

The report further stated that cybercriminals managed to exploit ICOs for over $2 million in Q2. This is based on the data collected from over 1000 ETH wallets used by criminals.

“According to my estimates, the recent tx spam on the ETH network costs up to ∼ $15m USD (∼= 5m green teas, ∼25 Coinbase seed rounds, ∼0.9 of Telegram ICO) Free market principles prevent me from being too upset at someone using the ETH blockchain as they wish, but wow”

MyEtherWallet is also the most popular platform used to scam users. In the month of April, MyEtherWallet was hijacked. This resulted in 215 Ethereum being phished within 2 and a half hours.

To top it off, fake websites are also used by scammers. MyCrypto report states that almost 845 ETH has been scammed.

Furthermore, a game based on the Ethereum smart contract, FOMO 3D, has been labeled as a scam by the community and is called as BitConnect 2.0.

The competitors of Ethereum are also on the rise in the cryptocurrency market. With projects such as Tron [TRX], EOS [EOS], and Cardano [ADA] claiming to surpass Ethereum in the next few months by delivering their products on schedule.

The post Ethereum [ETH]: The graveyard for ICOs and Scams appeared first on AMBCrypto.