Recently, the auditing and tax-services firm, Deloitte conducted a survey called Breaking Blockchain Open wherein several aspects of blockchain were covered. Some of the subjects touched by the report were the current and future state of the blockchain, data and insights in different countries and industries, among others.

According to the 2018 report, a fair amount of global businesses are dedicating their time and resources in establishing new use cases and patents for the blockchain technology, despite the drawbacks such as high costs and low returns.

The survey also revealed that one-third of the sample subjects have already begun to implement blockchain for production, whereas 41% of them indicated towards bringing blockchain into the equation in the near future.

However, the challenges and problems in the blockchain industry reflected through the Deloitte survey have also been softly questioned by its employees. The report included the account of one such person. Involving the ’emerging disruptors’ in the future of blockchain, a few employees stated that the survey did not carry the opinions and data from start-ups or emerging disruptors. The report stated:

“Some of our colleagues at Deloitte argue that our recent blockchain survey results don’t necessarily tell the whole story and might not adequately reflect the level of innovation infiltrating each industry sector. The reason: The survey focused only on enterprise organizations implementing legacy-constrained solutions, and not on start-ups or emerging disruptors.”

A total of 1,053 respondents was chosen for the survey, which was conducted across 7 countries, namely, United States, Canada, United Kingdom, Germany, China, Mexico and France. 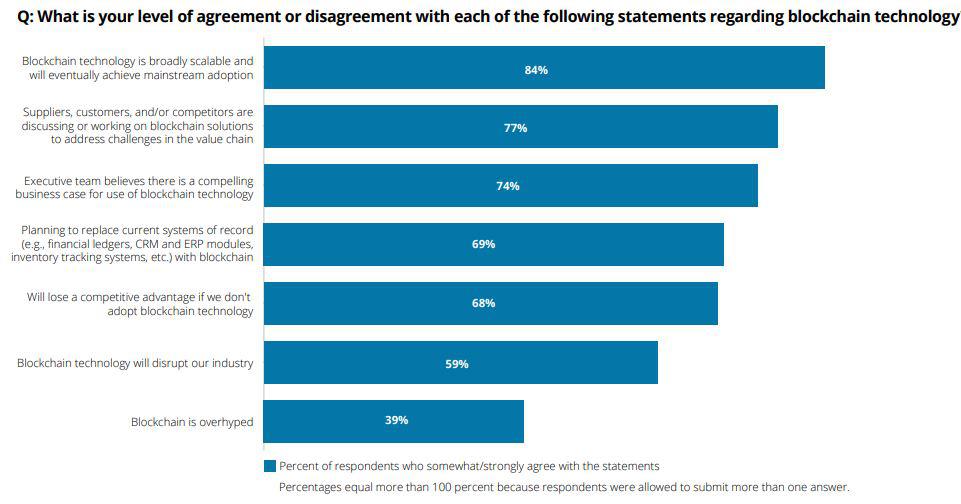 When asked about the investments made by the organizations to back the systems with blockchain, Mexico scored with the maximum of 42% among other countries. The lowest organizational investment was recorded to be from the United States, which is about a mere 14%.

Regarding the use-case of the blockchain technology, supply chain was found to be the most popular field to benefit from it with 53% of votes. The Internet of Things [IoT] was the runner-up under the use case segment of the survey with 51% of votes. Other areas that could make use of this technology are believed to be digital identity, digital records, digital currency, payments and voting, according to the sample crowd.

The post Deloitte 2018 survey says, blockchain perceived as over-hyped by 44% of US respondents appeared first on AMBCrypto.