CoinMarketCap is one of the world’s trusted source for cryptocurrency information such as price, volume, marketcap etc., which is used by millions of individuals, organizations, and exchanges. However recent claims by some of its followers are not in its favor, Kevin Rooke, a cryptocurrency enthusiast tweeted: 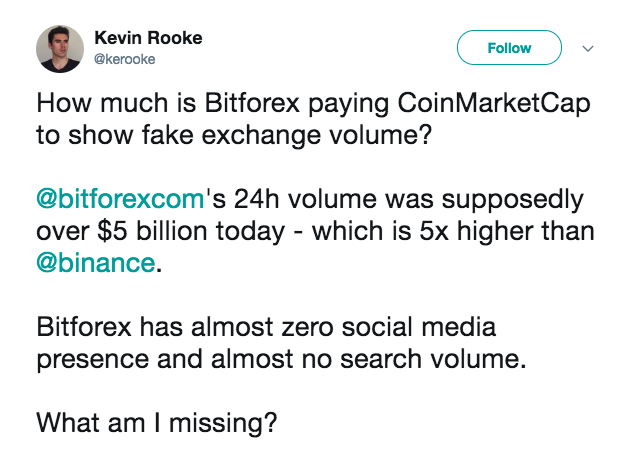 According to Kevin, CoinMarketCap is misleading its users by displaying fake volumes on cryptocurrency exchanges. Moreover, some users have claimed to witness the manipulation, however there has been no evidence and metrics to prove its existence. Previously, CMC was accused of aiding wash trading. Wash Trading is a method whereby a user is misled into investing by providing false information.

Moreover, it has been pointed out that the search volume of BitForex is nowhere close to that of Binance, according to Google Trends.

“It’s honestly embarrassing that we can’t trust the most widely used crypto data site to provide reasonably accurate information. These kinds of blatant lies make it impossible to trust anything else shown on their site.”

In addition, on their blog, CoinMarketCap had stated that they ‘stand for data transparency and clarity’ when they were previously accused of manipulating their data. They stated that all the information which is provided on their website is accumulated from hundreds of exchanges based on the APIs which is provided to them.

“When we list exchanges, we do our best to verify with exchanges that the APIs they provide us will pipe through the freshest and most accurate data possible.”